WATCH: an arresting view from space of powerful Hurricane Fernanda churning in the Pacific as day turns to night 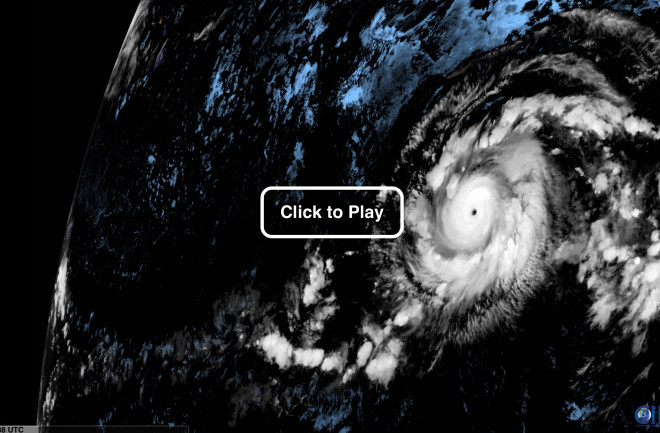 The GOES-16 weather satellite acquired the imagery used in this animation showing Hurricane Fernanda swirling in the eastern Pacific Ocean for 24 hours, starting on Saturday, July 15. (Note: The animation repeats several times.) As of Saturday, Fernanda was a powerful Category 4 hurricane with sustained winds close to 130 miles per hour. (Source: RAMMB/CIRA SLIDER. Please note that The GOES-16 data are preliminary and non-operational.) As of Monday afternoon, winds of about 125 miles per hour continued to swirl within Hurricane Fernanda as it churned westward in the eastern Pacific Ocean. But as the Category 3 storm begins to move over cooler surface waters, it should begin to weaken and eventually peter out, posing no threat to land. And a good thing, too, because Fernanda has been a very powerful storm, reaching Category 4 strength on Friday, July 14th and attaining maximum sustained winds of 145 miles per hour. To produce the animation above showing Fernanda from the vantage of space, I used a cool new web application: the Satellite Loop Interactive Data Explorer in Real-time, or "SLIDER" for short. The image data come from the new GOES-16 weather satellite. The animation shows Fernanda over the course of 24 hours, starting on Saturday afternoon. During the period covered by the animation, day turns to night, and back to day again, providing what I find to be a really arresting view of the storm. Seeing Fernanda both in daytime and nighttime is made possible by an imagery product called "GeoColor." This allows an almost seamless transition between visible imagery acquired during the day and infrared imagery captured at night.

Following behind the west-moving Hurricane Fernanda is a disturbance, as well as Tropical Depression Seven-E. All three can be seen in this image acquired by the GOES-16 weather satellite on Monday, July 17, 2017. (Source: RAMMB/CIRA SLIDER) Behind Fernanda to the east is a disturbance that stands a 60 percent chance of developing into a tropical cyclone over the next 48 hours, according to the National Hurricane Center. And behind that disturbance is a tropical depression designated Seven-E. The NHC forecasts that cyclone to become a bona fide tropical storm tonight or Tuesday. But over the long run (~five days), it should weaken as it encounters increasing wind shear and relatively cool surface waters. Meanwhile, in the Atlantic basin, Tropical Storm Don has formed east of the Windward Islands, prompting the hurricane center to issue a tropical storm warning for Grenada, and a watch for Barbados, St. Vincent and the Grenadines, and St. Lucia. It's a relatively small storm and should dissipate in about 72 hours, after bringing stiff winds and dropping two to four inches of rain across the Windward Islands through Wednesday morning.