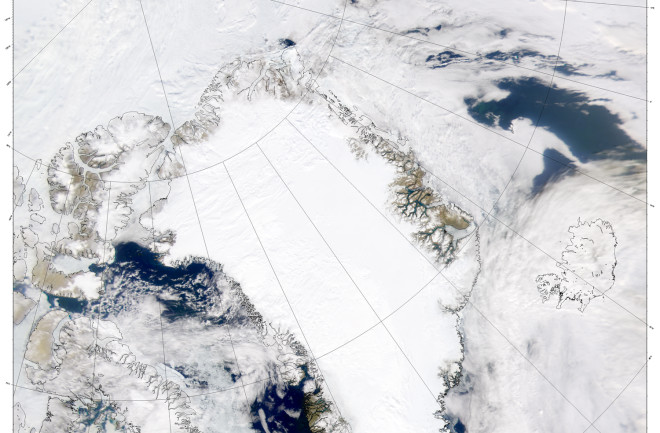 All of Greenland is seen in this image captured by the SeaWiFS sensor on an orbiting NASA satellite on Nov. 15, 2000. A 10,551 feet in elevation, the summit of the Greenland ice sheet is a very cold place indeed. But not even this remote spot has escaped the amplification of global warming in the Arctic that has seen temperatures rise faster in the region than anywhere else on Earth. In fact, whereas for the Arctic as a whole, temperatures have risen about twice as fast as the globe overall, new research shows that between 1982 and 2011 the rate of warming at Greenland's summit has been six times the global average — and it has been increasing over time. The researchers say the onset of rapid warming at the summit is coincident with a weakening and shifting in the polar vortex that began in the mid-1980s. These changes have also been associated with dramatic warming in the Canadian High Arctic. The polar vortex is a stream of air in the upper atmosphere that ordinarily girdles the North Pole during the winter months, helping to bottle up cold temperatures. When it weakens or shifts, cold air can spill out of the Arctic to lower latitudes, whereas the Arctic is typically milder than average. "We interpret the near-coincident shift in air temperatures at Summit, Greenland, as suggesting that the air temperature at Summit responds to changes in the polar vortex in a similar manner to air temperatures in the Canadian High Arctic," the researchers write in a paper appearing online today in the journal Geophysical Research Letters. The warming in Greenland has caused record or near record melting at the surface of the ice sheet in 2002, 2005, 2007, 2010 and 2011, "leading up to the 2012 extreme event, when 98.6 % of the Greenland Ice Sheet briefly experienced surface melt," the researchers say. In 2012, there was even some melting at the summit. The research suggests that this unprecedented event was not just a "singular extreme event" but the result of the warming observed at the summit over the past few decades. I'll be emailing some questions to one or more of the researchers, and I'll post their responses along with more graphics, once I hear back.