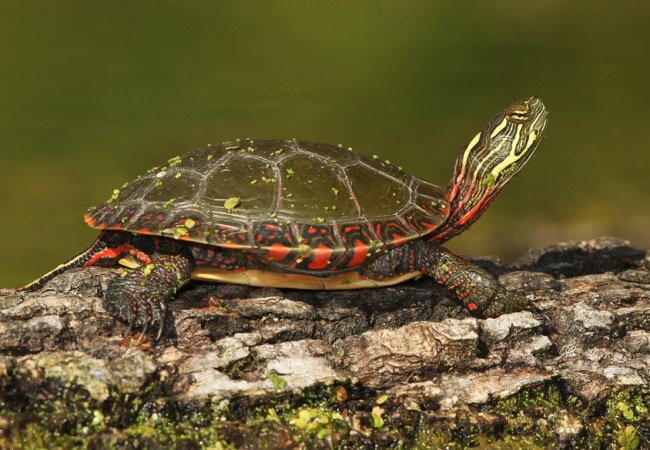 (Chrysemys picta), the most abundant and widespread species of native turtle in North America. They wanted to see if a mother turtle could shift the timing of her egg-laying enough to impact the gender and survival of her eggs. By observing painted turtles in Illinois, the researchers found that a mother turtle can lay her eggs a few days earlier or later in the season to cope with changing environmental temperatures. For example, in a warm year she can nest earlier than usual. However the researchers say these behavioral changes aren't enough. 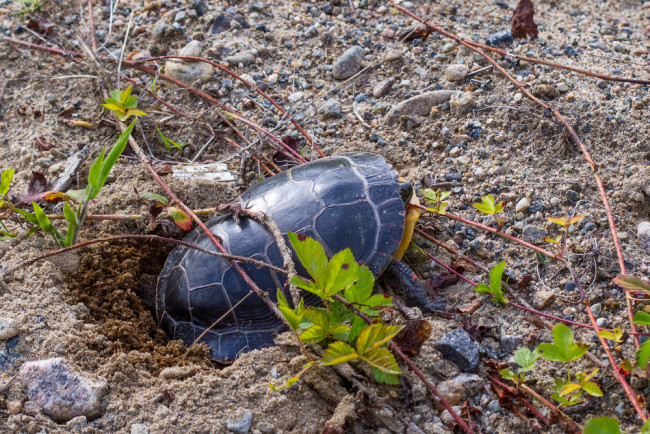 Painted turtle laying eggs in the nest she dug in the ground. Image courtesy of Elliotte Rusty Harold/Shutterstock. The researchers came up with a mathematical model that took into account seasonal and developmental temperatures as well as nesting dates to determine how various combinations of these factors would impact sex ratios and survival of painted turtle offspring. To test the model, researchers used it to predict the gender of a clutch of 46 eggs, and were correct about 40 of them. Then they put future temperatures into their model. Even with a temperature rise of one degree Celsius, the researchers found that 100 percent of painted turtles will be born female by the end of the 21st century. That's bad news considering that conservative climate change models predict a four-degree Celsius rise in temperatures over the next century. What's more, the model shows that turtle nests may not even make it this far: The warming temperatures will kill many eggs before they hatch. Some individual turtles may be able to adapt by laying their eggs in wetter or shadier areas, the researchers say, but evolution doesn't offer the turtles much hope. Adult painted turtles can live to be over half a century old, and the species has been around for 15 million years, according to the fossil record. Such a long-lived species, whose young take many years to reach sexual maturity, can't evolve quickly enough to deal with a warming climate. The results

were published in the May issue of The American Naturalist. The worst news? The researchers say the painted turtle's lack of adaptability is likely to be the case for other species like snakes and other reptiles that lay their eggs in the soil as well. Top image courtesy of Brian Lasenby/Shutterstock