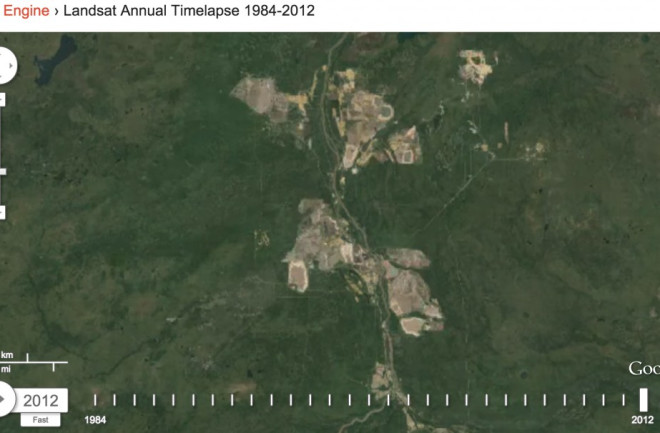 Screen shot from a Google Earth Engine animation showing the growth of mining activities for oil sands in Canada near the town of Fort McMurray, Alberta. Please click to watch the animation. (Source: Google) The news is in: President Obama has just vetoed legislation approved by both houses of the U.S. Congress that would have allowed construction of the Keystone XL oil pipeline to go forward. He wielded the veto pen just a matter of hours after the bill reached his desk. The pipeline has become a symbol in the political battle over climate change. But lost in the clamor is a discussion of the environmental impact of extracting the petroleum from Canada's vast oil sands fields. So I thought I'd use this post to provide some visual context that might be helpful in understanding that impact. But first... In his veto message to Congress, Obama wrote:

Through this bill, the United States Congress attempts to circumvent longstanding and proven processes for determining whether or not building and operating a cross-border pipeline serves the national interest.

As that message implies, the president hasn't made a final decision on the pipeline. He is reserving final judgment until environmental and regulatory reviews are in. The proposed 36-inch-diameter pipeline would carry up to 830,000 barrels of crude oil per day over a distance of 1,179 miles, stretching from Hardisty, Alberta to Steele City, Nebraska. It was conceived as a way to move the unconventional, heavy petroleum from Canada's oil sands fields to the United States. Development of those fields — open pit mines from which the oil sands are extracted — has grown dramatically in recent years. To get a visual sense of that growth, click on the image at the top of this post. That will launch a Google Earth Engine time lapse animation consisting of Landsat images acquired between 1984 and 2012. The impact of the oil sands energy boom has been significant. Here's a how a recent article in National Geographic described it:

The forests are crisscrossed by an estimated half million miles (800,000 kilometers) of roads, pipelines, and 15-foot (4.6-meter) corridors used for seismic testing for oil and gas deposits. One massive deposit of oil mixed with sand underlies northeastern Alberta's forests, where vast open-pit mines now cover more than 120 square miles (311 square kilometers). As many as 15,000 people have recently been employed in oil sands projects, which helps explain why few Albertans have protested the bonanza that has altered their economy and their landscape.

False color satellite image of a large portion of North America. (Source: NASA Worldview) Above is a false color image acquired by NASA's Terra satellite on July 29, 2014. I've circled the location of the Canada oil sands fields so you can get a sense of where they're located. Click on it to get a bigger image. And if you look really closely at it, you may be able to see the brown scars from the open pit mines.

Satellite view of Canada's oil sands fields. (Source: NASA Worldview) Separating the bitumen from the sand requires a lot of water. And most of that water, laced with toxic chemicals, ultimately winds up in waste pools. You can see those pools in the image above. This close-up image was captured by Terra in June of 2014. I've chosen this particular false-color view in both satellite images because it highlights areas of disturbed ground well, as well as the waste pools, which appear here in varying shades of blue. With environmental and regulatory reviews still underway, Keystone XL still stands a chance of being built. But the plunging price of petroleum has somewhat undermined the economic logic. So it will be interesting to see how this turns out.