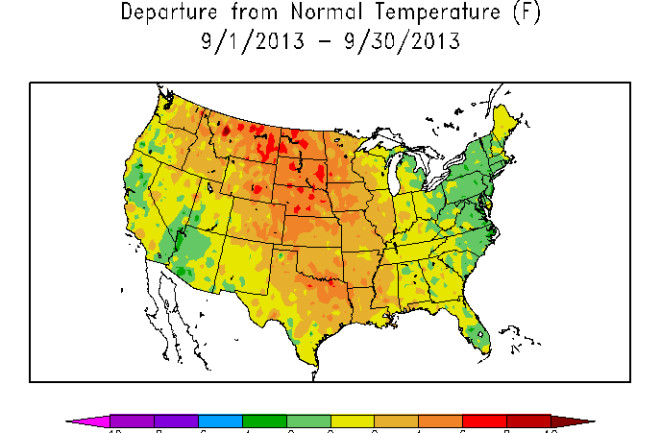 Source: National Climatic Data Center Carbon emissions in the United States may be down, as announced by the Energy Information Administration yesterday, but temperatures are still running high. Last month was the sixth warmest September in the United States, in a record stretching back 119 years. The map above, from the National Climatic Data Center, shows how temperatures departed from the long-term average. (You can create your own maps at NCDC here.) Here's how precipitation shaped up in September:

Source: National Climatic Data Center Thanks to precipitation that in large parts of the West exceeded 200 percent of normal, September ranked as the 12th wettest on record, according to the NCDC. The Front Range of Colorado made it's own special contribution. Look closely at Colorado on the map and you can see a pinprick of magenta color showing an area centered on Boulder where rainfall exceeded 800 percent of average. In fact, as has been widely reported, parts of the Front Range near Boulder received more than a year's worth of rain in just a few days during September. We're still grappling with the aftermath of the resulting floods, including a possible toxic legacy left behind as the flood waters receded.

Source: NCDC In the aftermath of the extreme rainfall it's only natural to ask whether extreme weather is on the rise in the United States. Click on the thumbnail at right to see a graph showing the portion of the contiguous U.S. subject to extreme weather, year by year since 1910. Carbon dioxide and other greenhouse gases are the most significant drivers of rising average global temperatures, of course. But what about extreme weather? Here's what the recent report of the Intergovernmental Panel on Climate Change had to say on the subject, in its Summary for Policymakers document:

Meanwhile, emissions of carbon dioxide in the United States continued to drop in 2012 even as the economy grew, according to the EIA. The decrease means that emissions are now at their lowest levels since 1994, and 12 percent below the peak recorded in 2007. The energy agency ties the decrease to a mild winter, gains in energy efficiency, and a large-scale shift from coal to natural gas to generate electricity. This is great news. But it probably will have little effect on the course of global warming, since the United States isn't even the largest emitter of carbon dioxide any longer. China is — and as the ongoing air pollution crisis there demonstrates, that country continues to burn prodigious amounts of coal and other fossil fuels. At least for now, other nations aspiring to higher living standards are likely to increase their own emissions as well.