U.N.: Bring Back the Iraqi Wetlands 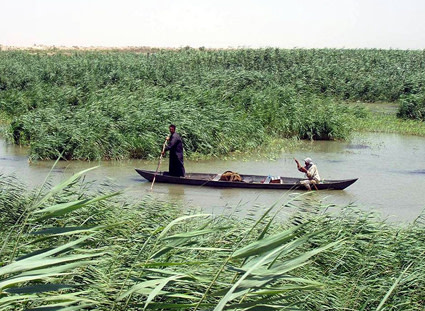 Though Iraq was the Cradle of Civilization, a wet and fertile place, Americans are more accustomed to thinking of it as the endless desert they see in photographs and news clips. But even with the ongoing war, the United Nations today announced that it wants to try to put the fertile back in the Fertile Crescent, and revive dying Iraqi wetlands. With water from the Tigris and Euphrates rivers coming in, Iraqi wetlands had long been home to local wildlife and migrating birds, as well as many people called the Marsh Arabs who inhabited the land. But Saddam Hussein declared those people traitors in the 1990s and drained the area, shrinking wetlands by almost 92 percent. Locals wrecked Saddam's dams after his downfall, and the water reclaimed about half of the original wetland area, bringing back with it some of the birds and fish, too. The U.N. Environmental Program now has a plan in place that it hopes will spur further recovery, and representatives say that Iraq could ask to have the wetlands named a World Heritage Site by 2010. With the country's infrastructure struggling to rebuild, it's nice to see its environment take a positive step. But a plan is no guarantee of protection, and the marshlands are home to some of Iraq's most promising oil reserves. With the country needing all the money it can get, it'll be hard for even the good-intentioned to resist that.