Typhoon Utor is seen over the South China Sea in this animation of images from an MTSAT weather satellite. (Image: NOAA) After pummeling the Philippines, Typhoon Utor is swirling over warm waters that will probably help sustain it as it tracks toward an expected landfall in southeast China. The storm is blamed for at least two deaths on the northern Philippine island of Luzon, and 44 fishermen are reported missing. Eighty percent of the infrastructure in the town of Casiguran near where the typhoon came ashore is reported to be destroyed. Utor weakened as it passed over mountainous terrain on Luzon. But as the animation of satellite images above suggests, the storm seems to be reorganizing after emerging over the South China Sea. It may strengthen first and then weaken again before making its second landfall, this time as a Category 2 storm south of Hong Kong: 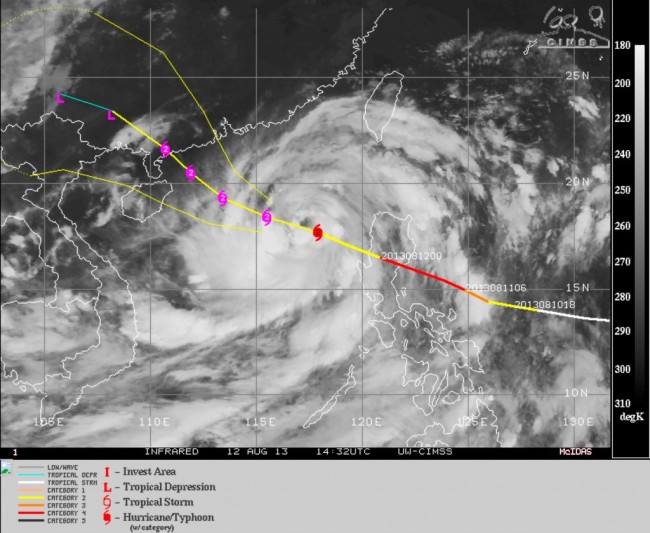 Typhoon Utor's forecast track across the South China Sea as it heads for a second landfall in southeastern China. (Image: Cooperative Institute for Meteorological Satellite Studies) This region has already been hit in recent weeks by two previous typhoons, Mangkhut and Jebi, which brought over a foot of rain from southern China to Vietnam. Typhoon Utor could add insult to injury, with the potential for severe flooding.