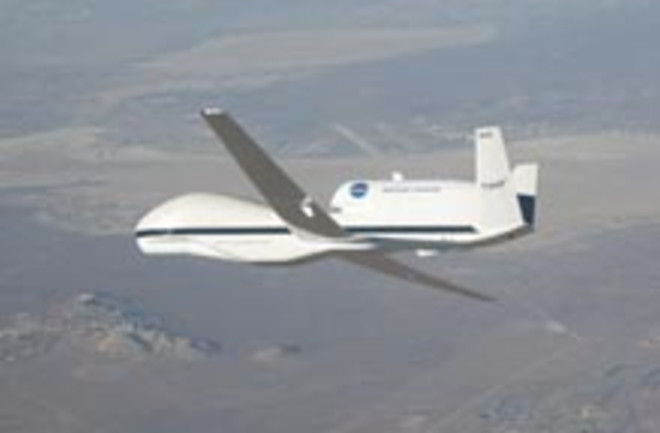 For the better part of a decade, the Global Hawk unmanned aerial vehicle has coasted through the stratosphere, surveilling vast panoramas of land below for the U.S. Air Force and Navy. Now the plane's broad reach will serve science. NASA announced this week that it had completed the first test flight of a Global Hawk retrofitted with monitoring equipment to help scientists study the the oceans, the atmosphere, and more.

"We can go to regions we couldn't reach or go to previously explored regions and study them for extended periods that are impossible with conventional planes," said David Fahey, co-mission scientist and research physicist [CNN]

. From the comfort of their offices in Dryden Flight Research Center in the Mojave Desert, pilots flew the plane 14 hours up to the Arctic Ocean on this test run. Though this flight lasted about 14 hours, the Global Hawk can stay aloft for 30, and reach altitudes of 60,000, or twice as high as your last commercial airline flight attained.

Instead of the high-resolution cameras and heat-seeking sensors the plane ... typically carries when used in Iraq and Afghanistan, the Global Hawk was outfitted with a series of instruments capable of measuring and sampling greenhouse gases, ozone-depleting substances, and aerosols [Los Angeles Times]

. However, the UAVs can be employed in a pinch for other services, too. The Air Force used the cameras on theirs, for instance, to study the impacts of the Haitian earthquake from above. For more on future applications of the military's unmanned vehicles, check out the May issue of DISCOVER hitting newsstands now. Another Earth observer launched this week will go even higher than NASA's Global Hawk. The European Space Agency's Cryosat-2, strapped to the top of a Russian intercontinental ballistic missile launched from Kazakhstan, reached orbit yesterday. Success tasted especially sweet for the Cryosat team, who lost the first satellite during a botched launch five years ago:

The Russian rocket failed to separate from its third stage, and the whole assembly, including its satellite, plunged into the Arctic Ocean – the very waters whose icy secrets CryoSat had been designed to uncover [The Independent]

. Cryosat-2 is so named because its decade-long mission is to study the cryosphere, the scientific name for the parts of the world covered in ice. In a polar orbit—which passes over both poles—the satellite will continually document both ice thickness and extent.

CryoSat-2 has incredibly high-resolution altimeters (able to measure ice thickness to an accuracy of 1 centimeter), so we can finally gain an accurate measure of how much water is locked as ice in the poles [Discovery News]