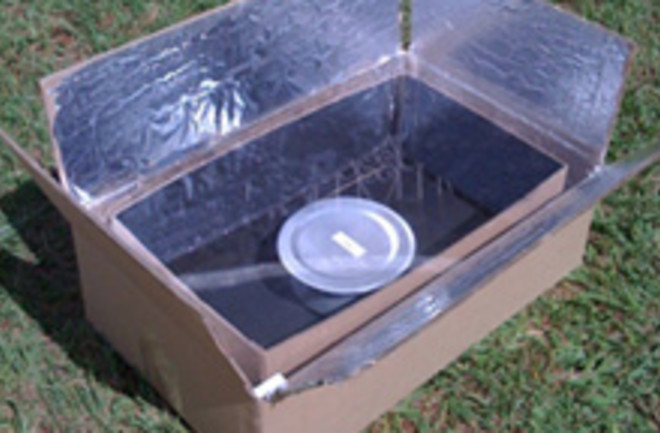 The Kyoto Box, a $6 solar cooker made from cardboard, has won the Financial Times-sponsored Climate Change Challenge contest for innovative ways to decrease the human impact on the environment. Its capacity to not only cook food but also sterilize water could help three billion people reduce their greenhouse gas emissions. The Kenya-based Norwegian creator of the cooker, Jon Bøhmer, has been awarded $75,000 to put the idea into production. Named after the United Nations' Kyoto Protocol, the cooker is made from two cardboard boxes, one inside the other, with either paper or straw insulation placed in between; an acrylic cover on top lets in and traps sunlight. Black paint on the inner box, and silver foil on the outer one, help concentrate the heat. The trapped rays make the inside hot enough to cook casseroles, bake bread and boil water [CNN]. Covering the cooking pot with a transparent cover retains heat and water [BBC], and temperatures inside the pot can reach about 175 degrees Fahrenheit. With as many as 3 billion people dependent on firewood for fuel, it is hoped that the cooker will eliminate the small-scale deforestation that has cumulatively become a major contributor to global warming worldwide. By allowing users to boil water, the simple device could also potentially save the millions of children who die from drinking unclean water [CNN]. The Kyoto Box was chosen from five finalists; the other four included a garlic-based feed additive to cut methane emissions from livestock, an indoor cooling system using hollow tiles, a cover for truck wheels to reduce fuel use and a "giant industrial microwave" for creating charcoal [Reuters]. The box can be produced in standard cardboard factories, and Bøhmer is already working with one factory in Nairobi. Bøhmer, who has started a design firm called Kyoto Energy, also designed a sturdier version made of recycled plastic, which he says would also be extremely cheap to produce. His next step is to conduct trials with 10,000 cookers in 10 countries, including India, Indonesia, South Africa, Kenya and Uganda [GreenBiz.com]. "We're saving lives and saving trees" [Reuters], he said. "I don't want to see another 80-year-old woman carrying 20 kilos of firewood on her back. Maybe we don't have to" [CNN]. Related Content: 80beats: Architects Propose Fantastic Greenhouses Across the Sahara 80beats: A Solar Power Plant in the Sahara Could Power All of Europe