In California’s Central Valley, a gas utility is harvesting methane from manure on cow feedlots. Critics worry the push toward biogas will only further entrench two polluting industries. 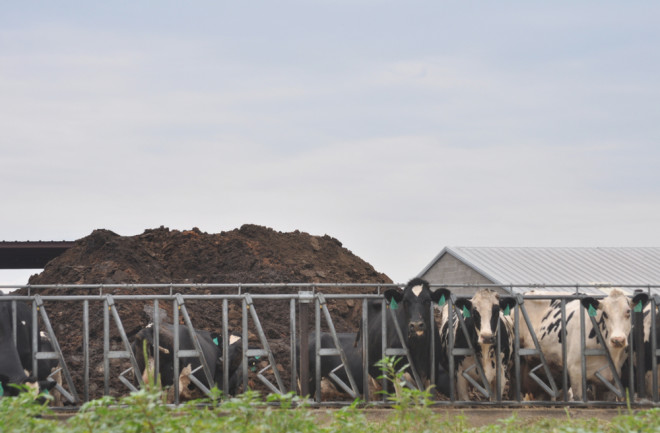 On days when the air pollution is especially bad, a mother in Tulare County, California – where cows outnumber people 2 to 1 – forbids her children from going outside. The woman, who declined to be named for fear of reprisal from her neighbors in the dairy industry, said that nearly everyone in her family, including herself, suffers from a combination of severe allergies and asthma, overlapping illnesses that cause sleepless nights, sick days and weekly doctor’s appointments.

She runs an air filtration system in their home to protect her children from the toxic fumes wafting off freeways, oil wells and cow feedlots. For an immigrant family of modest means, it can be costly to run the system, which consumes a great deal of power. Fortunately, she was able to get a discount on electricity from her power provider because her doctor prescribed the filter to guard against pollution.

Worried about water contamination as well, she also drives 20 miles to buy four gallons of clean water each week, as the water dispensaries in her neighborhood don't filter out certain toxins. While she and her children bathe in the water that comes from their faucet, she doesn’t use it for cooking and would never allow anyone in her family to drink it. Dealing with pollution is a daily struggle.

“It affects us at every level: financially, psychologically,” she says. “The worry for our children — it consumes us.”

Tulare County sits on the southern end of California’s Central Valley, which produces one quarter of the nation’s food. The region, which is predominantly Hispanic, sees some of the worst pollution in the country, part of which comes from concentrated animal feeding operations, or CAFOs. Despite being a major source of pollution, the CAFOs have recently adopted a green sheen thanks to the Southern California Gas Company, or SoCalGas, the nation’s largest gas utility.

As climate-conscious California cities make plans to wean off natural gas, SoCalGas and other utilities are investing in greener alternatives to stay in business. So, rather than buy natural gas, which is mostly methane, some utilities are collecting methane seeping from cow manure at CAFOs. The upside is that utilities are selling gas that would leak into the atmosphere anyway, rather than sourcing fossil gas. Advocates, however, fear that the use of biogas will only further entrench the CAFOs polluting the Central Valley.

“Communities are already living in a cocktail of really poor environmental choices they didn’t make,” said Juan Flores, a community organizer with the Center on Race, Poverty and Environment, and a former dairy worker.  “With biogas, there are no direct benefits coming back to them.”

CAFOs use water to clean cow manure from barns, and they store that liquid waste in outdoor lagoons. Using anaerobic digesters, they can harvest biogas from lagoon waste and sell it as renewable natural gas. SoCalGas is purchasing gas from more than 40 percent of the Valley’s digesters, which are typically operated by companies such as Calgren Renewable Fuels and Maas Energy Works. In December, the California Public Utilities Commission cleared the way for SoCalGas to sell renewable natural gas to its customers, to the disappointment of some environmentalists.

“To what other industry do we say, ‘Oh, we value the pollution you made’ instead of saying, ‘clean up your mess’?” said Matt Vespa, a clean energy attorney with Earthjustice.

Methane is a potent heat-trapping gas that is prone to leaking from gas drilling sites and pipelines in addition to cow feedlots. Because the dairy industry accounts for more than half of California’s methane emissions, the state has allocated more than $180 million to digester projects as part of its California Climate Investments program. Another $26.5 million has come from SoCalGas as part of a settlement for a natural gas leak in Aliso Canyon that dumped more than 100,000 tons of methane into the atmosphere.

While biogas, as it’s known, sounds promising, its potential is limited. Fossil gas alternatives could only supply about 13 percent of current gas demand in buildings — a limitation acknowledged by insiders from both the dairy and natural gas industries, whose research provided the data for this figure.

“So-called efforts to ‘decarbonize’ the pipeline with [dairy biogas] are a pipe dream only a gas utility executive could love,” Michael Boccadoro, executive director of Dairy Cares, an advocacy group for the dairy industry, says. “It just doesn't make good policy sense.”

Biogas also produces the same contaminants as fossil gas when it’s burned, says Julia Jordan, a policy coordinator at Leadership Counsel for Justice & Accountability, which advocates for California’s low-income and rural communities. For that reason, biogas will do little to address the health issues that stem from using gas stoves, which have been shown to generate dangerous levels of indoor pollution.

The biggest beneficiaries of biogas, advocates say, are gas utilities and dairy operations. As California cities look to replace gas heaters, stoves and ovens with electric alternatives, SoCalGas can tout biogas as a green alternative to electrification. Meanwhile, the dairy industry will profit from the CAFO system while Central Valley communities bear the burden of air and water pollution. SoCalGas did not respond to a request for comment.

“We’re relying on a flawed system that makes manure a money-making scheme for not just the dairies but the natural gas industry,” Jordan says. “And this industrial, animal-feedlot style of agriculture is not working for the people in the Valley.”

Beyond methane, industrial dairies also emit huge sums of ammonia, which combines with pollution from cars and trucks to form tiny particles of ammonium nitrate that irritate the lungs. The Central Valley has some of the highest rates of asthma in the state, particularly among children. While digesters curb methane and ammonia emissions, they don’t eliminate pollution from feedlots entirely.

Feedlots also contaminate water supplies. A 2019 nitrate monitoring report found elevated nitrate concentrations in groundwater at 250 well sites across dairies in the Central Valley. The report said that nitrates seeping from liquid manure lagoons play a role. Young children exposed to nitrates can develop blue baby syndrome, which starves the body of oxygen and can prove fatal. Some studies have also linked nitrates to cancer and thyroid disease.

Tulare County residents are worried that the use of biogas will encourage the growth of industrial dairies, worsening groundwater pollution, says Blanca Escobedo, a Fresno-based policy advocate with Leadership Counsel for Justice & Accountability. Escobedo’s father worked for a Tulare County dairy.

“Maybe the state of California can lower their emissions through these digester programs,” Escobedo says. “But in the Valley, are people simply worse off?”

Digesters are most profitable when fed by larger herds. At least 3,000 cows are needed to make an anaerobic digester financially viable, according to a 2018 study. Dairies that have received state digester funding have an average herd size of 7,500 cattle.

“Because of the tremendous concentration of pollutants in one area, [biogas] isn’t a renewable resource when you’re using it on this scale,” says Jonathan Evans, a senior attorney and the Environmental Health Legal Director at Center for Biological Diversity. “Especially in terms of California’s water supply and the impact on adjacent communities who have to suffer the brunt of increasingly poor air quality.”

In 2016 California passed a bill aimed at, among other things, reducing methane pollution from dairy operations, in part by supporting dairy digesters. But, facing intense pushback from the dairy industry, legislators added an amendment that blocks the California Air Resources Board from regulating dairy industry emissions until at least 2024. Because the industry has been successful in curbing methane pollution thus far, Boccadoro says, it may skirt additional regulations. For advocates, that’s part of the problem.

“Unfortunately, with the way it’s going now [the dairy industry] might say, ‘We have digesters. We’re making biogas. We’re making progress on our goals,’ ” Jordan says. “And because of that, we’re worried there won’t be any regulation.”

When a 3,000-cow dairy operation set up shop 1.5 miles away from Tom Frantz’s home in Kern County in 1994, the first thing he noticed was hoards of flies. But more than 20 years later, it’s not the flies that worry him; it’s the pollution. He and his brother-in-law have both developed asthma, and Frantz watched his father die from a heart problem after a long winter of especially poor air quality.

Frantz, an almond farmer, co-founded the Association of Irritated Residents, or AIR, to advocate for better air quality. Now he is planning to move away. He said it will be a sacrifice to lose his home and his farm, but at 71, he hopes the move will add a few more years to his life.

“I like where I’ve lived for 70 years, but this has affected me very personally,” he says. “I want to see dairies pay for their pollution.”

Alessandra Bergamin writes for Nexus Media News, a nonprofit climate change news service. You can follow her on Twitter, @AllyBergamin. This story was made possible by a grant from the Open Society Foundations.