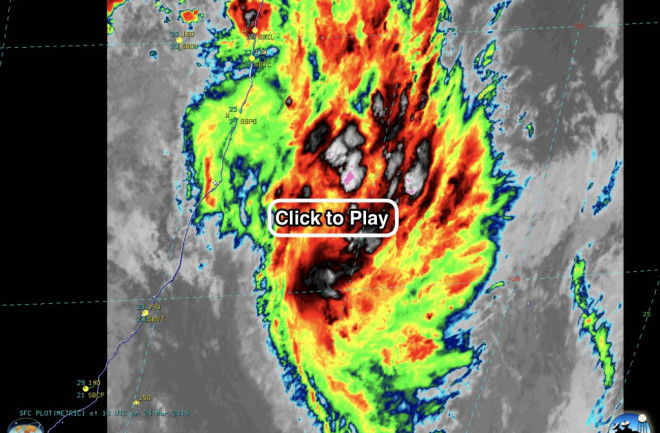 Infrared imagery from the GOES-16 weather satellite shows the formation of Tropical Storm Iba off the east coast of Brazil at 16 UTC on March 24, 2019. (Note: This is a big file, so after you click on the screenshot, the animation may take a little while to load. Source: Cooperative Institute for Meteorological Satellite Studies) For the first time since 2010, a full-fledged tropical cyclone has formed in the South Atlantic Ocean. Say hello to Tropical Storm Iba. You can see it in the animation above, about 500 miles northeast of Rio de Janeiro, Brazil. The animation consists of infrared imagery from the GOES-16 weather satellite. It shows Iba as it strengthened on Sunday. The false colors correspond to the temperature of the cloud tops in the storm, with black and pinkish colors indicative of the very coldest temperatures. (And at -90 C, or -130 F, in some pink areas, we're talking very cold!) Since temperature decreases as you go higher and higher in the troposphere, the coldest areas correspond to parts of the storm where clouds have blossomed most vigorously to the highest altitudes.

Tropical Storm Iba as seen in visible wavelengths of light by the GOES-16 weather satellite on March 24, 2019. (Note: This is another large file, so it may also take awhile to load after you've clicked on the screenshot. Source: Cooperative Institute for Meteorological Satellite Studies) This animation shows what Iba looks like in the visible portion of the electromagnetic spectrum. It consists of GOES-16 images acquired at intervals of just one minute apart. That gives the animation an almost real-time feel. I'm particularly struck by the detail visible in areas of the storm where clouds are boiling up to great heights. Sub-tropical cyclones form about once a year in the South Atlantic. But those are different beasts from fully tropical cyclones, like Iba, which are much rarer in that part of the world. Scientists once thought that tropical cyclones could not develop in the South Atlantic. As explained by Jonathan Belles of weather.com, there were two reasons for this:

First, wind shear is typically too strong there. Wind shear pushes thunderstorms away from any area of low pressure trying to develop, instead of letting convection cluster near the low. Secondly, while tropical waves – disturbances not yet well organized – can act as seeds of tropical development as they roll westward from the coast of North Africa into the North Atlantic Ocean, no such tropical waves roll west off Africa south of the equator.

But in 2004, the formation of Hurricane Catarina showed that despite these factors, tropical cyclones could actually form in the South Atlantic. The storm came ashore in Brazil as a Category 1 equivalent on March 27, 2004. "More than 38,000 structures were damaged, and another 1,468 collapsed, with three people killed and 185 others injured," according to meteorologist Jeff Masters, writing in a post at the Category 6 blog.

Tropical Storm Iba, as seen by the GOES-16 satellite on Monday, March 25, 2019. (Source: RAMMB/SLIDER) Luckily, Iba is not expected to strengthen into a hurricane or threaten land. In this view above of the storm, acquired today by GOES-16, wind shear has pushed some of the higher-level cloudiness away, revealing the low-level circulation center of the storm. Look for the whirlpool-like feature in the middle of the image. (And make sure to click on the image to enlarge it.) Here's an animation showing the swirling center of the storm, alongside an infrared view of the action: https://twitter.com/CIMSS_Satellite/status/1110199261000552448 Meanwhile, Down Undah...

Cyclones Veronica (left) and Trevor (right) are seen in this image from the Suomi NPP satellite along Australia’s north coast Saturday, March 23, 2019. (Source: NASA Worldview) Australia has been smacked by twin tropical cyclones: Veronica and Trevor. Trevor actually came ashore twice as a Category 3 storm with 115 mph winds. The first landfall was on Tuesday in Queensland. It then crossed the Cape York Peninsula and swept out into the Gulf of Carpentaria. The storm's second Category 3 landfall came on Friday in the Northern Territory. You can see it in the image above acquired by the Suomi-NPP satellite. Trevor is the one to the right. Meanwhile, Tropical Cyclone Veronica, to the left in the image, battered the northern Australian coast Saturday and Sunday (March 23 and 24) as it slowly moved just offshore for 12 hours. At one point it reached Category 4 strength with 130 mile per hour winds. It subsequently weakened and came ashore as a Category 2 storm.