In this animation of Tropical Storm Boris off the Pacific coast of Mexico, the false color scheme highlights areas of intense precipitation. Bright green is indicative of the most intense rainfall, followed by red tones. (Source: NOAA) A little earlier today, the National Hurricane Center upgraded Tropical Depression 2-E off Mexico's Pacific coast to a tropical storm. It's named Tropical Storm Boris, and as of 11 a.m. PDT the system had already brought nearly 4 inches of rain to Puerto Chiapas, Mexico. As I write this, Boris has maximum sustained winds of 40 miles per hour. The storm is moving slowly northward and is not expected to strengthen significantly before landfall, which should happen by early Wednesday. The most significant threat from Boris is rain — and we're talking huge amounts of it. From the National Hurricane Center:

RAINFALL...BORIS IS EXPECTED TO PRODUCE AS MUCH AS 10 TO 20 INCHES OF RAIN OVER A LARGE PART OF SOUTHERN MEXICO THROUGH SATURDAY...WITH ISOLATED AMOUNTS EXCEEDING 30 INCHES LIKELY OVER THE MOUNTAINOUS TERRAIN OF THE MEXICAN STATES OF OAXACA AND CHIAPAS. BORIS IS ALSO EXPECTED TO PRODUCE TOTAL RAINFALL AMOUNTS OF 5 TO 10 INCHES IN GUATEMALA. THESE RAINS ARE LIKELY TO RESULT IN LIFE-THREATENING FLASH FLOODS AND MUD SLIDES.

Five deaths — all in a single family — have already been attributed to heavy rains that triggered a landslide late last week in Guatemala. 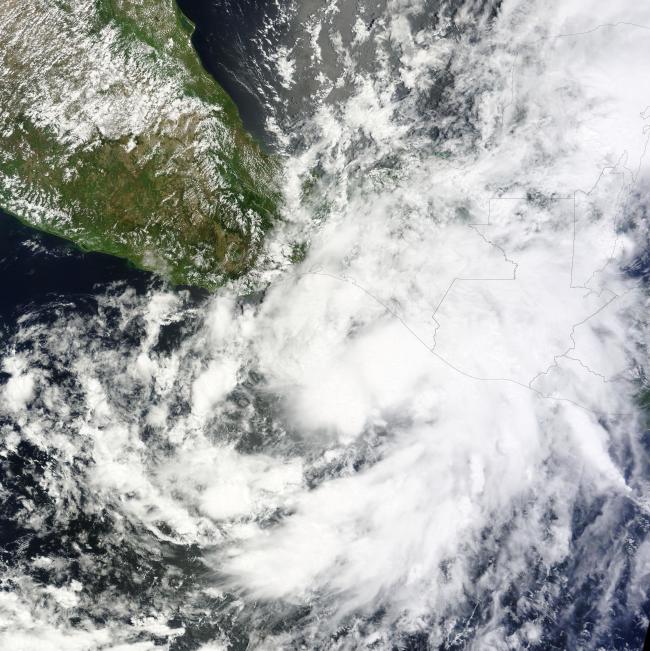 Tropical Depression 2-E, which has since developed into Tropical Storm Boris, is seen in this image acquired by NASA's Terra satellite on Tuesday, May 2, 2014 (Source: NASA) It doesn't take a hurricane to cause utter devastation in this region. As Weather.com meteorologist Nick Wiltgen points out:

A slow-moving tropical depression or storm near the Pacific coast of southeast Mexico is not good news for Guatemala. Tropical Storm Agatha formed in this area at the end of May 2010, and it caused 160 deaths and almost $1 billion in damage in Guatemala alone due to heavy rain and landslides.