An animation of infrared satellite images shows Tropical Storm Arthur swirling off the coast of Florida today. (Note: The "L" in this animation indicates Arthur as a tropical depression. But it has been upgraded to a tropical storm. Source: Cooperative Institute for Meteorological Satellite Studies) It's finally here — the first tropical storm of the Atlantic hurricane season. He's named Arthur, and if you live along the Eastern Seaboard, he may upset your plans for July 4th. I emphasize "may," because at this point it is still difficult for forecasters to predict how Tropical Storm Arthur will evolve over the next four days. That said, forecasts of cyclone tracks are more accurate than strength predictions (as my colleague Andrew Freedman points out here). With that in mind, the animation of satellite images above shows Arthur tracking up the U.S. East Coast and coming very close to Cape Hatteras in the Outer Banks of North Carolina. That should happen at about 8 a.m. on Friday, according to the forecast from the National Hurricane Center this morning. But how strong will the storm be? Right now, the best two performing models for making storm intensity forecasts 72 hours out are are saying either a strong tropical storm with 70 mile per hour winds, or a Category 1 hurricane with 95 mile per hour winds, according to Jeff Masters, chief meteorologist for Weather Underground. 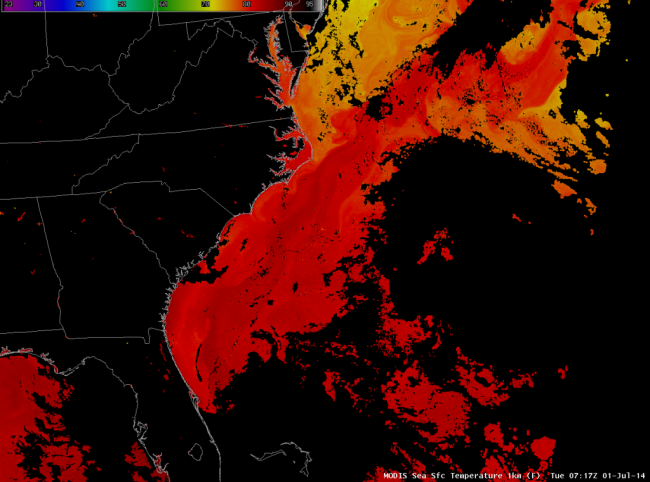 Sea surface temperatures off the U.S. East Coast are warmer than normal. As seen in this image from the Suomi NPP satellite, they're running 80 degrees F and above in some places. (Source: CIMSS Satellite Blog) One of the factors that will influence Arthur's development is the temperature of the Atlantic waters the storm passes over on its march northeastward. And as the image from the Suomi NPP satellite above indicates, sea surface temperatures are running warmer than 80 degrees F in some places along Arthur's projected track. Granted, this is where the Gulf Stream flows. But even so, sea surface temperatures here are anomalously warm right now. But other factors could serve to tamp down Arthur's strength. Time will tell. As of today, Tropical Storm Arthur was lashing the Bahamas with heavy rains and wind gusts of up to 36 miles. And it should bring up to four inches of rain to the east coast of Florida today through Wednesday, according to Jeff Masters. 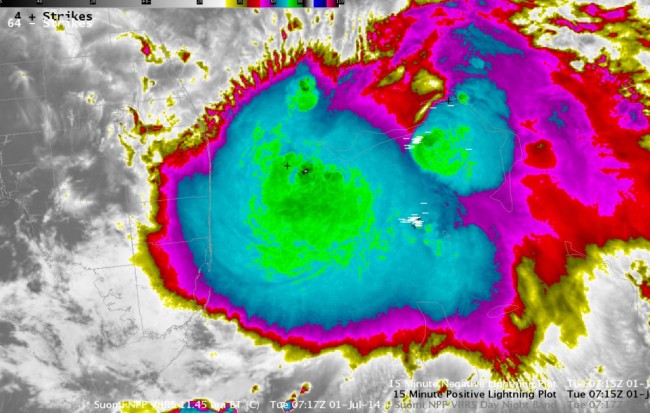 The VIIRS instrument on the Suomi NPP satellite captured this false-color infrared image of Tropical Storm Arthur today. (Source: CIMSS Satellite Blog) The image above shows Arthur as it looked overnight to the Suomi NPP satellite. It's an infrared image, with the false colors indicating the temperature of the cloud tops. The coldest temperatures are in the middle of the storm; they are where the cloud tops are highest. Also visible in the image are lightning plots — white lines for detections of negative lightning and black crosses for positive lightning. (For an explanation of negative and positive lightning, check this out.) Finally, on average the first named storm of the Atlantic season occurs on July 9, according to the National Hurricane Center. So I guess you can say Arthur is a preemie. I also have to say that he took me by surprise, since dust has been streaming out of the Sahara and into the atmosphere above the Atlantic Ocean. This ordinarily tends to suppress storm development I was getting ready today to post an animation of fairly dramatic satellite images showing the dust moving west across the Atlantic. But I decided to hold off on that for a day or so and focus on Arthur. Suffice it to say that he was born of a disturbance close to the U.S. coast — away from the influence of the dust.