Toxic Green Slime: Coming to a Lake or Beach Near You? 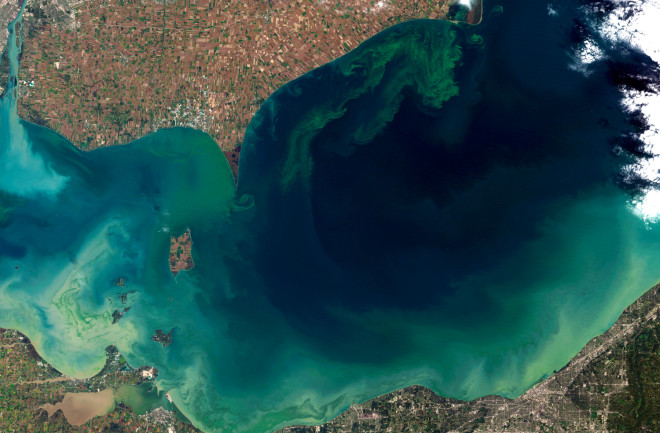 A record-breaking bloom of algae in Lake Erie in October, 2011 is seen in this Landsat-5 satellite image. The green scum is mostly Microcystis, which produces a liver toxin and can cause skin irritation. (Image: NASA) Yesterday, you may have read a news story here at Discover about the results of a study into the causes of Lake Erie's record-breaking 2011 algae bloom, and how climate change could make events like these more common. Today, I thought I would advance the story by fleshing out some of the broader context. "Several feet deep of green gunk on your shoreline certainly doesn't do wonders for property values or your ability to enjoy the lakeshore," says Anna Michalak, a researcher at the Carnegie Institution and the lead author of the study, published Monday in the Proceedings of the National Academy of Sciences. But she and other researchers agree that there are more reasons than that to care about the gunk: It can be toxic, and it is an increasing global problem. Blooms can occur when nitrogen and phosphorous from fertilizers run off into lakes, estuaries and other waters. (Phosphorous is more of a problem in lakes; nitrogen in coastal environments.) Michalak and her research team documented what she called "a perfect storm of weather events and agricultural practices" that triggered Lake Erie's biggest bloom ever. And also how climate change could make such events more frequent. For the details, I encourage you to see Breanna Draxler's story from yesterday. As Michalak and her colleagues pointed out in their paper, this kind of problem is increasing all around the world. Much of the world's population, and agricultural production, is concentrated near the coasts, she points out. "And as more and more land is used more intensely for agriculture, we're seeing an increased issue with nutrient loading into coastal systems." Alan Townsend, an expert in biogeochemistry and ecosystem ecology at the University of Colorado, Boulder (and a colleague of mine here), concurs. "In recent decades, algal blooms have been increasing in severity and frequency in many parts of the world — and not just the U.S. and Europe," he says. In an email to me, he continued:

China is a big one, with some nasty documented cases and undoubtedly many more that have not hit the global radar. Toxic blooms have also occurred in several parts of Latin America, perhaps most notably Brazil. Some of these have resulted in people dying. Canada has also had problems — e.g Lake Winnipeg, among others.

When big blooms of algae die, they sink, and the organisms that decompose them use up oxygen in the water. The process is known as "eutrophication," and the plunge in oxygen levels is called "hypoxia." "This is harmful to fisheries and other aquatic life," Michalak notes. But algae blooms also can have a direct economic impact. For example, during the massive 2011 bloom in Lake Erie, the city of Toledo, which draws drinking water from the lake, had to spend several thousand dollars extra each day to treat it.

A bloom of Microcystis algae in Lake Ontario. (Image: NOAA) "These blooms in particular are hazardous, because they involve a specific cyanobacteria called Microcystis that releases a compound that is toxic to the liver," she says. Another species releases a neurotoxin. "With the mess made within Lake Erie, we may have been 100 to a thousand-fold above international standards for these toxins," she says. Thus the need for more expensive water treatment efforts during the bloom. Michalak cautions against simply looking for villains. Fertilizer has become essential in feeding a growing global population. And, in fact, her research revealed that reduced-tillage agriculture, introduced to lower the amount of climate-altering carbon that is emitted from the soils of agricultural fields into the atmosphere, has had the unintended consequence of increasing the runoff of nutrients into Lake Erie. "Sometimes the things we do for the best possible reasons turn out to have negative consequences," she notes. Another contributing factor has been the big push to grow corn — a fertilizer-intensive crop — to make ethanol for supplementing gasoline. But this is not one of those environmental problems that should cause us to despair. As Alan Townsend points out, it is not at all intractable:

Many of our modern agricultural systems are far from optimized in terms of maximizing the food gain from fertilizers while minimizing the loss to the environment. Doing better here would actually increase food security, save money, and lessen growing environmental and economic risks posed by nitrogen and phosphorous pollution. And we can do better — much of this is not a matter of pie-in-the-sky inventions of the future. With proper will and policies in place, most of the world's major breadbaskets could greatly improve their N and P use efficiency in ways that would be win-win scenarios, at least in the longer run.