To Study Storms, NASA Flies a Plane Into Hurricane Earl 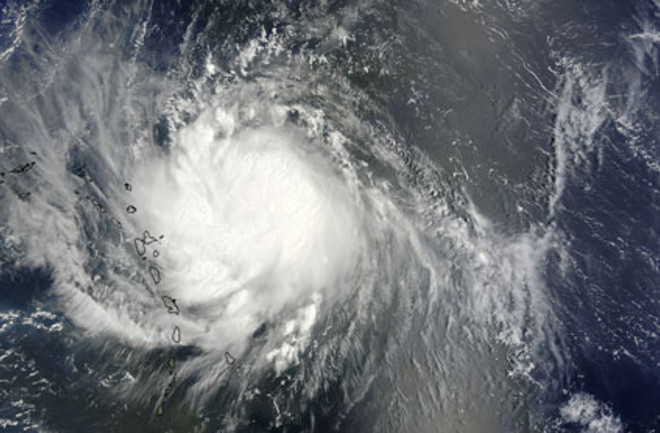 As Tropical Storm Earl grew into Hurricane Earl this past weekend, NASA had a plan: Fly a plane into it. A DC-8 aircraft, used for NASA's new Genesis and Rapid Intensification Processes (GRIP) project, darted around the storm to trace the movement of atmospheric aerosols--particles suspended in the air--and to drop weather sensors, giving NASA researchers data on how such storms form and strengthen.

NASA's DC-8 aircraft left Fort Lauderdale at 10:05 a.m. EDT on Saturday heading for St. Croix for a multi-day deployment that targeted (at that time) Tropical Storm Earl.... On Sunday, August 29, the DC-8 completed an 8.5-hour science flight over (then) Hurricane Earl west of St. Croix. The research aircraft flew at altitudes of 33,000 feet and 37,000 feet and descended to 7,000 feet northwest of the storm area to collect measurements of atmospheric aerosols. The flight originated in St. Croix but diverted to land in Fort Lauderdale, Fla., due to the degrading weather forecast for St. Croix associated with the approaching hurricane. [NASA]

Researchers in the plane successfully ejected parachuting weather sensors called dropsondes--which can measure such things as wind speed, temperature, and pressure--into the heart of the storm, explains NASA mission specialist, Scott Braun. The scientists hope the collected data will help them understand why some tropical storms become destructive monsters, while others lose power and fizzle out.

Braun, who was aboard the plane for Sunday's 8.5-hour flight, said the aircraft managed to get into the storm reasonably quickly after takeoff, and flew multiple passes at an average altitude of around 35,000 feet (10,668 meters). Despite having to cut a few planned legs short because of lightning, Braun said the flight was a success. "We got good radar data, good dropsonde data, everything went well." [OurAmazingPlanet]

An interactive GRIP map allows website visitors to track the path of both the plane and the storm, which will move north over the course of the week. For estimates of which East Coasters will get the worse weather for the next five days check out the Hurricane Warning Center's projections. Another wider (some 600 miles across) but weaker storm, Danielle, is further north over the Atlantic. Yesterday, Danielle was losing gusto, starting to degrade from hurricane to extra-tropical storm status. DISCOVER blogger Phil Plait describes (and depicts in full satellite image glory) both Earl and Danielle in a Bad Astronomy post. A third storm, Fiona, is also on meteorologists' radars. But Keith Blackwell of the University of South Alabama's Coastal Weather Research Center says that Fiona isn't expected to become a hurricane, and notes that Earl may not play nice with the newcomer.

The same factors pushing and powering Hurricane Earl are expected to remain in place for days, so tropical storm Fiona is likely to stay offshore of the U.S. But Fiona is unlikely to grow into Hurricane Fiona, Blackwell said, because winds from the more powerful Hurricane Earl will probably disrupt the new storm. If Fiona gets too close to Earl, he said, "Earl might eat it." [National Geographic]