To Save Australia's Biodiversity, Put Kangaroo on the Menu 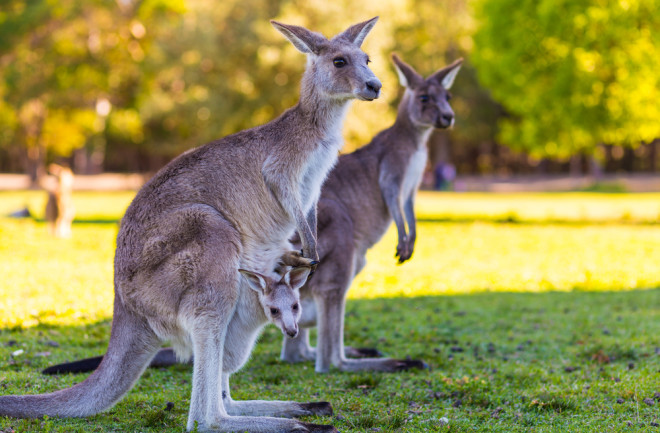 (Credit: structuresxx/Shutterstock) In Australia, a question lingers: Do we shoot the kangaroos? The proposition sounds a bit inhumane at first blush, after all, the kangaroo stands proudly on the Australian coat of arms. The bouncing beasts are a fixture of the outback. But in recent years, the roos have been doing quite well—in fact, too well. Their numbers have been bolstered by the extinction of natural predators and generous rainfall; there are now so many kangaroos, that one ecologist is calling for increased consumption of kangaroo meat to bolster the yearly cull and bring kangaroo numbers to sustainable levels. To save them, we need to eat them, the argument goes.

University of Adelaide associate professor David Paton is a staunch proponent of kangaroo consumption, as ABC News Australia reports. An ecologist, he's conducted experiments with natural grasslands protected from kangaroo encroachment, and found that the landscape bloomed anew with native grasses and animals normally forced out by the hungry herbivores. The recent bounty of kangaroos, he argues, comes at the cost of biodiversity and pushes well past sustainable levels. A more aggressive stance is in order, Paton believes, and if pushing kangaroo consumption — leaner and healthier than beef and other meats — helps, all the better. The Australian government already conducts yearly culls of the kangaroo population, based on a quota set on a state-by-state basis. It's necessary, they say, to both promote ecological health and protect the interests of farmers in the region, who complain that the animals encroach on their lands, eating grasses that protect against erosion, consume crops and interfere with livestock. The culls are carried out by hunters trained to put them down humanely, they say, and the culls merely counteract the side effects of human meddling in the environment. Animal rights groups, however, dispute the accuracy of those claims. Organizations like Animal Liberation South Australia say that the kangaroos are actually in more danger than it appears, and allege that kangaroo culls are more brutal than they appear. Though the animals are supposed to be killed with a single shot to the head, they say hunters often miss and merely wound the animals. Joeys are also unable to survive without their mothers, leaving many of them to die. It has also been argued that kangaroos are slow to recover from population declines because they raise only one joey a year.

Government data on kangaroo populations shows a rapid increase, with the number peaking at around 53 million in 2013 — more than double that of 2010. As of 2015, there were an estimated 44 million kangaroos in Australia, meaning that they outnumbered humans there by a factor of about two to one. This, despite yearly culls, which are usually capped to about 15 percent of the population. Whats more, the data shows that the quotas are almost never filled, and normally less than two-thirds of the maximum number of kangaroos are killed. Anecdotal reports from Australia indicate the presence of large kangaroo mobs near farmland, and videos of them making their way into cities have also surfaced. https://www.youtube.com/watch?v=u_c8G2U010w The issue of culling kangaroos has surfaced before, such as in 2009, when the army shot about 6,000 of them at a training camp. Their numbers at that time were threatening endangered species of reptiles and insects living in the grasslands. The same threat persists today, making the prospect of popularizing kangaroo meat all the more pressing. You can already buy meat from kangaroos in grocery stores in Australia, although it's not very popular. To avoid the semantic concerns, the industry has been attempting to promote its product abroad, with some success, although a bacterial scare in Russia in 2008 and 2014 cut off a substantial number of customers. Getting Australian customers on board with eating their most iconic animal would be both a boon to the industry and to the government, which must now deal with thousands of dead kangaroos every year. Besides, they're actually supposed to taste pretty good.