To Help Reindeer Thrive in a Globally Warmed World--Castrate Them? 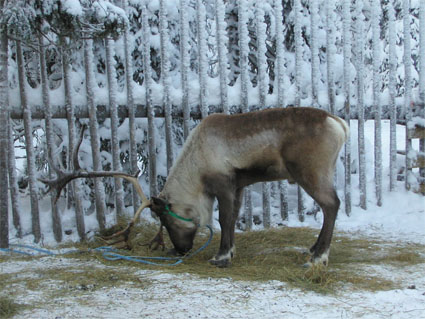 The chain of cause and effect seems clear: climate change causes Arctic temperatures to fluctuate, which causes ice build-up as snow repeatedly thaws and refreezes. And to Arctic reindeer herders--who want their herds to continue to eat the nice lichen underneath all that ice--the next link in this chain is also clear: castrate your reindeer. That's what researchers have decided will help the Arctic's indigenous people--the Sami--thrive as our world continues to warm up. As Reuters reports:

"Males castrated in the traditional way would have an increased chance of survival over other males since they maintain body weight and condition during the rutting season," according to a research document by Eli Risten Nergaard of Sami University College.

But that's not all. Researchers have found that castrated male reindeer are larger than their un-castrated brethren, are therefore better able to pound through the thick Arctic ice; they're also more willing to share their food with calves. In other words, castrated male reindeers facilitate the survival of the entire herd--that is, assuming they're not all castrated. From Reuters:

"To make herds more resilient in the future, we need to re-learn the traditional knowledge of castration," said professor Svein Mathiesen, coordinator of the University of the Arctic's Institute of Circumpolar Reindeer Husbandry.... More castration "could be useful to adapt to climate change," he told Reuters in the Arctic city of Tromsoe. "These animals are very good diggers for the small calves in the most critical period of the winter."

What, you may ask, is the traditional way of castrating a reindeer? Biting off a reindeer's testicles with one's teeth. Technically, the Sami usually perform what they call "half-castrations" on their animals so that the reindeer are docile, yet still have some testosterone coursing through their bodies to encourage muscle growth. Because the castrated reindeer are sterile, but continue to produce some testosterone, the term "half-castration" is used, wherein the male only loses one testicle. If you're a Sami in Norway, though, you're forced by law to have your reindeer surgically castrated under anaesthetic. The Norway rules could soon change to make life even less traumatic for the male reindeer--scientists are testing vaccines meant to mimic the effects of half-castration. Though castration in response to climate change may strike you as odd, it could be a lifesaver if you're an Arctic reindeer. The only question now is whether the castrating herders can keep up with demand. It's estimated that the Sami of Russia and the Nordic countries own roughly 2.5 million reindeer, so if they want to save their herds, they better get biting. Related Content: Discoblog: Rudolphette? Santa Employs Female Reindeer, Say Wildlife Experts 80beats: Endangered or Threatened? A New Fight Over Polar Bears’ Status 80beats: Climate Scientists Enlist Narwhals to Study the Arctic Ocean 80beats: Arctic Report Card: Warm Weather and Melted Ice Are the New Normal DISCOVER: Oh, Deer