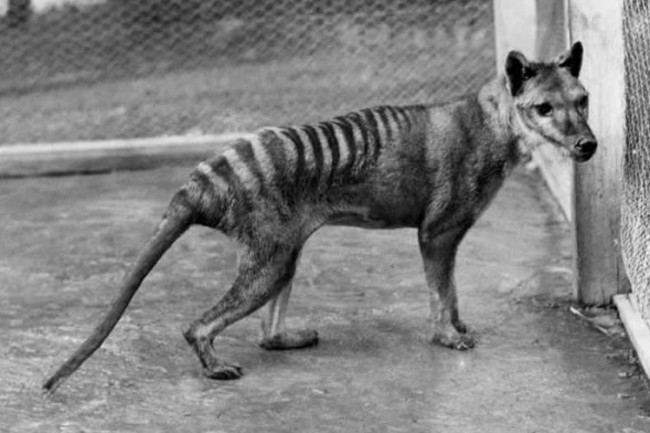 In the 18th and 19th centuries, explorers in Tasmania brought back tales of a strange creature that looked like a wolf with tiger-like stripes on its haunches. That animal was the thylacine. It was a marsupial, one of several mammals that raise their young in pouches, and more closely related to kangaroos and koalas than to dogs or cats.

Nonetheless, the similarities stuck, and they earned the thylacine several nicknames including “marsupial wolf” and “Tasmanian tiger”. Superficially, the dog-like features are most obvious. Its species name – cynocephalus – literally means “dog head”. In fact, its skull looks so much like that of a dog that professors at Oxford University would ask students to classify it, as a trick question in their final exams.

But the rest of the body tells a different story. After studying the thylacine’s elbow joint, Borja Figueirido and Christine Janis from Brown University think that it ambushed its prey like a cat, rather than chasing it down like a dog. It was more Tasmanian tiger than marsupial wolf.

Sadly, no one knows very much about how the thylacine behaved because human settlers, as is their way, exterminated it before anyone could properly study it. The last wild thylacine was killed by a farmer in 1930, and the last captive animal died six years later. Thankfully, their bones are still around and they still have much to reveal. Most of the attention has focused on the skull, but Figueirido and Janis wanted to look at the elbow instead.

The elbows of dogs and cats are distinct from one another, thanks to their different hunting styles. Dogs wear down their prey over the course of lengthy chases, and their legs are adapted for speed and stamina. To achieve that, they have sacrificed mobility around their elbow joints. Cats are different; they are ambush hunters that rely on stealth and speed to take down their quarry. Their elbow joints are more flexible, allowing them to twist their forearms and wrists, and grapple with their prey. You can see this movement in action when lions swat at the legs of fleeing gazelles, or when house cats bat at a ball of yarn.

By comparing eight thylacine elbows with those of 31 other mammals, Figueirido and Janis found that the thylacines cluster with ambushers rather than pursuers. It might have the skull of a dog, but it has the elbow of a big cat.

The duo’s conclusion fits with the results of some previous studies. For example, by creating a virtual simulation of the thylacine skull, Stephen Wroe concluded that it specialised on small prey, unlike the larger targets of pack-hunting wolves.

This doesn’t necessarily mean that the thylacine grappled with its prey in the same way that cats do. Its structure might reflect the constraints of its past. Like all marsupials, thylacines were born as tiny, grub-like babies that needed to crawl into their mother’s pouch. Figueirido and Brown suggest that they might have needed flexible forearms to make the trip. In that case, it might have been impossible for marsupials to evolve into dog-like marathon hunters.