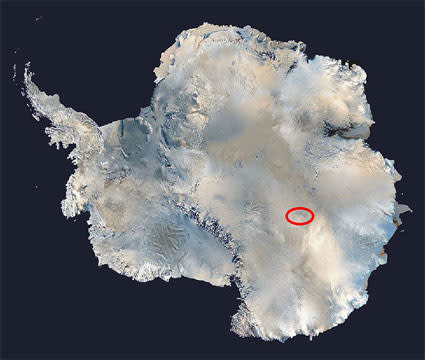 Antarctica's Lake Vostok--and its potential scientific findings--remains cut off from the outside world for yet another year. Russian scientists spent the Antarctic summer drilling towards the water in the frozen-over Antarctic lake, but plummeting temperatures forced them to leave earlier this week, as their airplane's hydraulic fluid was in danger of freezing. The Russians may have flown off, but they left some controversy behind. To keep the 12,300-foot-deep borehole from filling with ice the researchers loaded it full of kerosene, and some Antarctic experts are worried that the chemicals will contaminate an otherwise pristine place. The 6,200-square-mile lake is important for scientists because the iced-over waters have been isolated for over 14 million years. Biologists are excited to see whether it holds ancient microbes; climatologists are interested in the record held in its sediments; and geologists want to learn how such an isolated sub-glacial lake forms. And despite this year's setback, researchers are surprisingly unfazed:

Valery Lukin, head of the Arctic and Antarctic Research Institute in St. Petersburg says, "There is no frustration," and quoted Fridtjof Nansen, a Norwegian Arctic explorer: “The highest virtue of a polar explorer is the skill of waiting." [Science]

Environmentalists, though, don't share the researchers' calm when it comes to the kerosene left behind.

"I can understand the Russians don't want to start over -- it's a four kilometer ice sheet -- but this is a unique place," said Claire Christian of the Antarctic and Southern Ocean Coalition, a Washington, D.C.-based group focused on environmental issues on the Antarctic continent. "You have to use the most precaution that you can, and our main concern remains contamination." [Discovery News]

The Russians didn't make the kerosene-dumping decision on their own--members of the Antarctic treaty approved the idea. And it's not the first time potentially hazardous chemicals were piped into Vostok holes: After a drill bit broke in 2007, the Russians piped anti-freeze down the hole in an attempt to retrieve the drill bit (they couldn't, and eventually abandoned it). Nobody knows whether these chemicals will affect the still-isolated lake, and we won't find out for at least two years. Next December temperatures will be low enough for the Russian team to return, but if they stick to the plan they won't get samples of lake water that year.

Valery Lukin says they have devised a clever method for sampling the lake without contaminating it. "Once the lake is reached, the water pressure will push the working body and the drilling fluid upwards in the borehole, and then freeze again," Lukin says. The following season, the team will go back to bore in that frozen water, take the sample out and analyse its contents. [New Scientist]

80beats: NASA Finds Shrimp Where No Advanced Life Should Be: 600 Feet Beneath Antarctic Ice