An animation of visible and infrared images from the Suomi NPP satellite's VIIRS instrument shows the eye of Super Typhoon Vongfong on Tuesday. The visible-light image shows the storm under the light of a full moon, according to the Cooperative Institute for Meteorological Satellite Studies. (Source: CIMSS)

After intensifying explosively and becoming the strongest storm of the year earlier this week, Super Typhoon Vongfong is churning toward U.S. military bases on Okinawa and is expected to make landfall in Japan on Saturday. The powerful storm comes on the heels of Typhoon Phanfone, which left at least seven dead in Japan earlier this week, including three U.S. Air Force personnel who were swept away by waves on Okinawa. (Click on the thumbnail above for the forecast track of Vongfong from the Joint Typhoon Warning Center.) 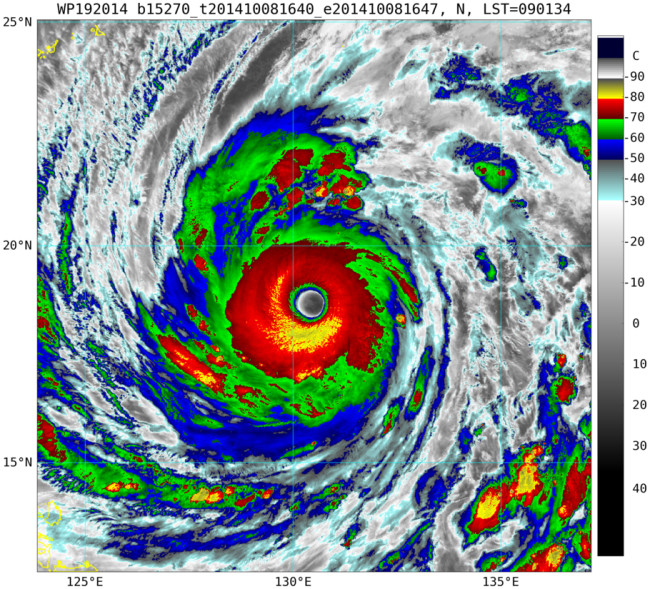 An enhanced infrared view of Super Typhoon Vongfong captured on Wednesday, Oct. 8, 2014 by the Suomi NPP satellite. (Source: RAMMB/NOAA) Vongfong peaked on Tuesday with winds approaching 180 miles per hour, making it about as strong as Super Typhoon Haiyan, which killed more than 6,000 people in The Philippines in 2013. It probably ranks as among the strongest 30 storms on Earth since 1970, according to the Washington Post.

Awesome comparison of recent powerful #typhoons including #Vongfong which we are tracking now. via: @NOAApic.twitter.com/NB5FSRvWae — Bill Karins (@BillKarins) October 8, 2014

As of this morning, Vongfong's winds were being clocked at 126 miles per hour, with peak gusts to nearly 180, according to the Japan Meteorological Agency this morning. Waves near the cyclone are forecast to tower more than 30 feet high today. 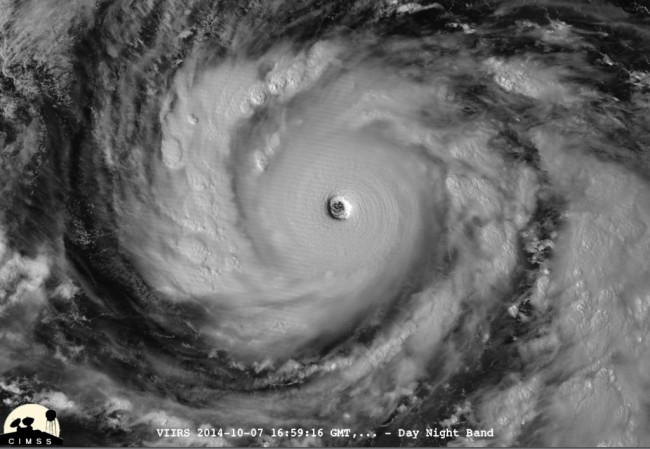 A beautiful image of Super Typhoon Vongfong as seen under the moonlight on Tuesday, Oct. 7, 2014 by the VIIRS instrument on the Suomi NPP satellite. While Vongfong threatens more mayhem in Japan, weeks down the road its lingering after-effects may enhance weather patterns many thousands of miles away. In fact, according to a fascinating post by NJ.com's weather blogger Stephen Stirling, it could help a steep ridge of high pressure build up in the western United States (which could have the unfortunate effect of adding yet more misery to heat and drought plagued California). Meanwhile, a trough of lower pressure could form over the eastern part of the country around Halloween, bringing a blast of cold air from the north.