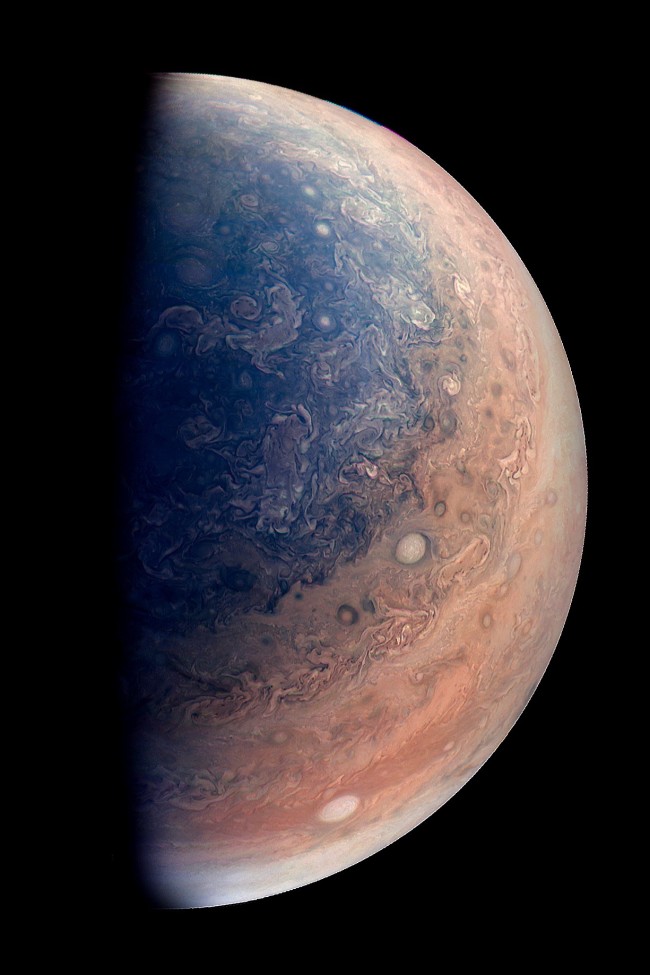 Enhanced color view of Jupiter’s south pole, created by citizen scientist Gabriel Fiset using data from the JunoCam instrument on NASA’s Juno spacecraft. (Source: NASA/JPL-Caltech/SwRI/MSSS/Gabriel Fiset) When I spotted this image of Jupiter on NASA's website, I felt a bit disoriented. At first glance, it looked like a fanciful artist's conception of the giant planet. But it's actually a real image of Jupiter's south polar region, acquired by the Juno spacecraft. (Make sure to click on it, and then click again to enlarge it.) The image has been enhanced to help bring out the fine detail in that achingly beautiful filagree of swirls, eddies and vortices in Jupiter's atmosphere. But whether enhanced or not, those features are very much real. And to my eye, they also seemed eerily familiar. I soon realized what those patterns reminded me of: the swirls, eddies and vortices of surface currents in our own oceans. Have a look for yourself: This visualization shows ocean surface currents during the period from June 2005 through December 2007. The somewhat meandering current that begins in the Gulf of Mexico and streams north along the U.S. east coast is the Gulf Stream. (Source: NASA/Goddard Space Flight Center Scientific Visualization Studio) Before I go any further, let's talk about the differences. First, an obvious one: Unlike the Juno image of Jupiter, this is not photographic. It's a visualization of ocean surface currents produced with a computer model that has synthesized data gathered at the surface, as well as by satellites in orbit. There's also a huge difference in size between the two planets: 1,300 Earths would fit inside Jupiter, which is the largest planet in the solar system. And while Earth is solid, Jupiter is massively gaseous — made mostly of the same stuff as stars: hydrogen and helium. (Although it's often claimed that Jupiter is a "failed star," it's not.) Scientists surmise that high pressures squeeze the hydrogen in Jupiter's interior so strongly that the gas turns into a liquid. Deeper still, whether Jupiter has a solid core is an abiding mystery — one that the Juno spacecraft has been tasked to solve. Then there's another difference that ultimately turns out to be less significant than it might seem: The patterns of swirls, eddies and vortices in Juno's image occur in Jupiter's upper atmosphere; whereas Earth's ocean currents obviously occur in water. On Jupiter, bands of light and dark clouds are the most apparent features of the atmosphere. These are bounded by jet streams that blow east and west. Within the light bands (called "zones"), high atmospheric pressure allows clouds of white ammonia ice to form. Within the dark bands (called "belts"), lower pressure inhibits the formation of these white clouds. This allows us to see deeper clouds of ammonium sulfide and ammonium hydrosulfide, which are given dramatic coloring by organic compounds. Oval storms also are quite evident in Jupiter's atmosphere, including in the south polar region. But here, the banding at lower latitudes gives way to "clusters of unorganized filamentary structures, streams of air that resemble giant tangled strings," as the news release accompanying the Juno image evocatively puts it. 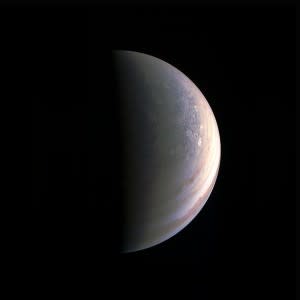 As NASA's Juno spacecraft closed in on Jupiter for its Aug. 27, 2016 pass, its view grew sharper and fine details in the north polar region became increasingly visible. (Source: NASA/JPL-Caltech/SwRI/MSSS) Juno gave scientists their first detailed look at Jupiter's polar regions less than a year ago. And what they saw surprised them. The first-ever images of the north pole (click on the image at right for an example) "looks like nothing we have seen or imagined before," said Scott Bolton, principal investigator of Juno from the Southwest Research Institute in San Antonio. "It's bluer in color up there than other parts of the planet, and there are a lot of storms. There is no sign of the latitudinal bands or zone and belts that we are used to — this image is hardly recognizable as Jupiter. We're seeing signs that the clouds have shadows, possibly indicating that the clouds are at a higher altitude than other features." The south polar region looks very similar. As in the north, the area is mottled with rotating storms — akin to terrestrial hurricanes, but much larger. How are the differences between these features and the ocean currents seen in the visualization somewhat less significant than it might seem? For sure, we don't see wavy ocean waters and the cloudy atmosphere above it as being the same. But from the perspective of physics, both the ocean and the atmosphere actually behave as a liquid. And phenomena of both — waves, for example — can be described by the same branch of science: geophysical fluid dynamics. 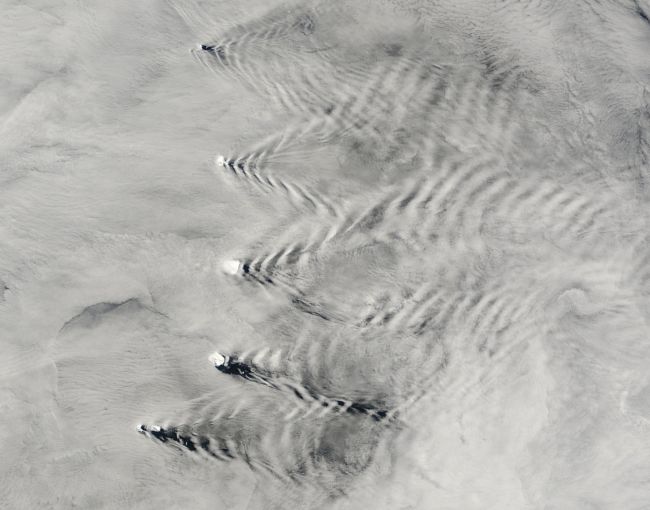 NASA’s Terra satellite captured this natural-color image on November 23, 2009 of islands in the South Sandwich chain. Airflow over the islands has triggered V-shaped waves that fan out toward the east. (Source: NASA Earth Observatory) The satellite image above offers a compelling example of how our own atmosphere behaves like a fluid. Those objects with the chevron patterns behind them are islands of the South Sandwich chain. But with just a quick glance you might mistake them for ships moving through a body of water and leaving wakes trailing behind them. A wake behind a ship is a wave phenomenon — just as the chevron patterns in the satellite image are a wave phenomenon. Winds are passing over the islands, causing waves to ripple through the atmosphere downwind. On the crests of these waves, clouds form. And in the wave troughs, the clouds evaporate. (For more on this fascinating phenomenon, check out this post at NASA's Earth Observatory.) Bottom line: Geophysical fluid dynamics apply to the patterns seen in planetary atmospheres, as well as to the patterns of ocean currents here on Earth. I don't know about you, but I find that idea to be as beautiful as the images I've included with this story.

If you want to delve deeper into the science of Jupiter, go here. Interested in the details of Jupiter's cloud patterns in particular? Click here for a good primer. And if you want to try your own hand at processing raw images from the JunoCam aboard the Juno spacecraft, go here.