The obscuring smoke from the Thomas Fire — now 70 percent as large as L.A. — smothers a large swath of SoCal's coast. 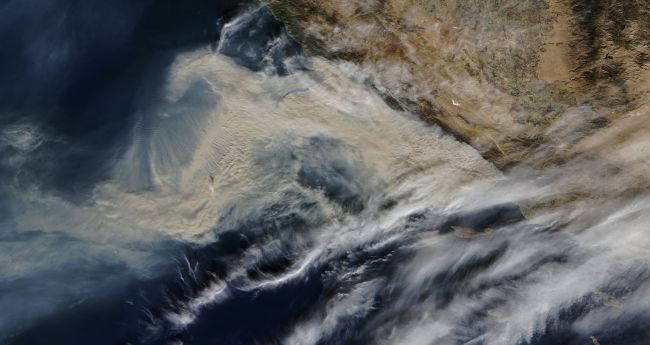 An image acquired by NASA's Terra satellite shows thick, brownish smoke billowing across a large area of the Southern California coast between Ventura and Santa Barbara on Sunday, Dec. 10, 2017. Please click on the image to enlarge it. (Source: NASA Worldview) I've seen my share of satellite images of wildfires. And whether it has been the size, the intensity, or the massive spread of billowing smoke, quite a few have horrified me. So when I saw the view above of the Thomas Fire blazing between Ventura and Santa Barbara, it wasn't as if I had never encountered anything like it. Even so, when I first saw the thick smoke obscuring about a 50-mile swath of the coast and pouring out far over the Pacific, I gasped out loud. I'm not saying that to be overly dramatic. It's just true. Perhaps I reacted in that way because I've spent quite a lot of time down there along that beautiful strand. So I can well imagine what it must be like under that appalling pall of smoke. 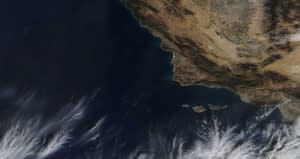 A view of the Southern California coast acquired by NASA's Terra satellite on Dec. 4, 2017, just before the Thomas Fire erupted near Ventura. (Source: NASA Worldview) The image was acquired by NASA's Terra satellite yesterday — Sunday, Dec. 10th, 2017. By way of comparison, the image to the right shows what this part of the California coast looked like to Terra on Dec. 4th, just before the blaze erupted. (Please click to enlarge it) Sunday was day 7 of the Thomas Fire. As of the evening it had consumed 230,000 acres — 71 percent as large as the entire city of Los Angeles. It is now the fifth largest wildfire in California's modern history — and still growing. Here's a map of the fire, from InciWeb: 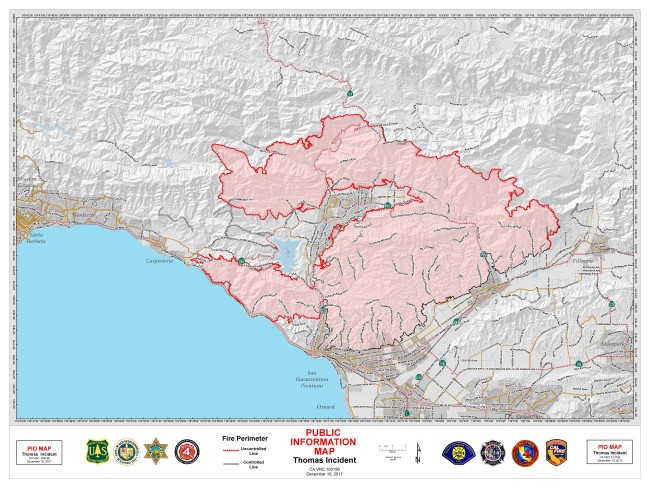 To look at fine detail of the fire's perimeter, click on the map to enlarge it. When you do, you'll see a finger of the fire pointing right at Carpinteria, which is now under threat, as are the communities of Summerland and Montecito just up the coast to the west. Voluntary evacuations were underway in those towns on Sunday. The two big lobes of the fire pointing toward the west almost completely enclose the community of Ojai in the mountains north of the city of Ventura. The blaze grew by an astonishing 50,000 acres today, and containment actually dropped from 15 percent to 10 percent. The Thomas Fire has destroyed 790 structures — and threatens a mind-boggling 18,000 more, according to this evening's update from CalFire. https://twitter.com/gvitty/status/939981486685437952?ref_src=twsrc%5Etfw&ref_url=http%3A%2F%2Fcimss.ssec.wisc.edu%2Fgoes%2Fblog%2Farchives%2F26302 This photo posted to Twitter today shows what it looked like from Newbury Park — about 25 miles away.