This cyclone almost became the East Coast's fifth nor'easter. What accounts for its beautiful comma shape? 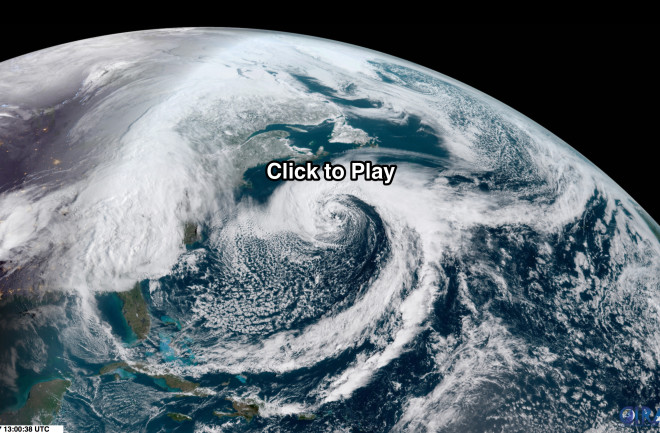 The GOES-16 weather satellite captured the image data used in this animation showing the evolution of a classic comma-shaped storm off the East Coast. The animation starts on March 25 as the storm is blowing out into the Atlantic and ends on March 27. Note: after clicking on the image you will be taken to another web page and may have to hit the play button to start the animation. (Source: RAMMB/CIRA/SLIDER) I first spotted a still image of this striking comma-shaped storm on Twitter. Captured by the GOES-16 weather satellite, the storm had already blown across part of the United States, dropping rain and snow along the way, and out into the Atlantic. Had it hugged the coast instead of pushing farther eastward, it would have been the fifth nor'easter in a row for the battered East Coast. Luckily, it did not. So now we can simply marvel at this meteorological wonder. Here’s that still image of the storm in its full comma-shaped glory: https://twitter.com/DanLindsey77/status/978660143058636800 After becoming intrigued by this still image of the storm, I decided to create the animation using an awesome interactive tool called "SLIDER": Satellite Loop Interactive Data Explorer in Real Time. SLIDER provides full-resolution imagery from both the GOES-16 and Himawari-8 satellites. It’s available not just to the scientific community but all of us well. So if you're a hopeless weather geek like me, you'll want to play around with it. (And if you haven’t transitioned to full geekiness, checking it out might push you over the edge!) The animation I created using SLIDER’s archived image data shows the storm streaming out from the U.S. midsection into the Atlantic and evolving into the classic comma-shape of a maturing extratropical cyclone. The animation covers the period from March 25 at 8:15 a.m. on the East Coast until 1:30 p.m. EDT on March 27. What accounts for that beautiful comma shape, and why is it different from the classic spiral of a tropical cyclone? Tropical cyclones, including hurricanes and typhoons, form as thunderstorms cluster and build around a central area of low atmospheric pressure in the lower latitudes. They draw their energy from warm sea surface temperatures. By contrast, extratropical cyclones like this storm are sprawling systems that take shape in the mid to high latitudes. They form along the jet stream, bringing rain, and where temperatures are cold enough, snow — and even blizzards. They're common in the United States during spring and fall, when seasons are changing and thus there are relatively large differences in temperature between the southern and northern parts of the country. It is these large temperature contrasts that help fuel an extratropical cyclone. Early in a cyclone's evolution, a warm front bearing moist air pushes northward as a cold front with drier air drops southward. Earth's axial rotation causes the leading edges of these different air masses to wrap around an atmospheric center of low pressure. This becomes the center of the cyclone. As the cyclone evolves, pressure in the center drops further and counterclockwise winds intensify, causing the air masses to swirl even more briskly around the center. Warm, moist air being pulled up from the south by the circulation pattern clashes with cold air continuing to drop down from the north. This clashing occurs up and down a long line determined by the flow of the jet stream. This, in fact, is the genesis of the long tail of the comma — along which thick clouds form and heavy precipitation tends to fall. (You can find a simple schematic illustrating this here. I'd include it with this post, but it's copyrighted material.) The gory details are actually even more complicated. So if you're interested in a deeper dive into how the interactions between warm and cold fronts around a center of low pressure lead to the formation of extratropical cyclones, check out this online presentation.