This California Company Is Making Furniture From Corn Husks 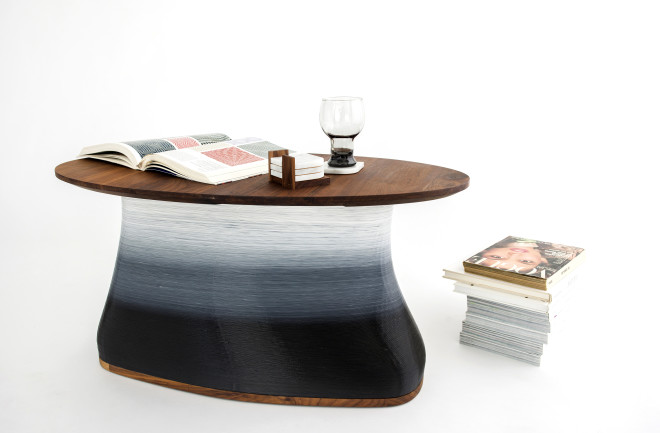 A start-up based in Oakland, California is bringing new meaning to the term “farm to table” by repurposing agricultural waste into 3D-printed furniture.

The company, Model No., began in 2018 with a mission to provide a greener alternative to traditional furniture manufacturing — from the materials themselves to cutting back on waste during production and distribution.

Its founders were looking to shake up the traditional model which is largely inefficient in how it operates. For example, while traditional manufacturing relies on using one mold after another on an assembly line to construct its parts, 3D printing can produce whole items one after the other.

“We have the capability where you could do a table and then you can do a shelf, you can do a chair — you can do different parts literally back to back to back,” says Model No. CEO Phillip Raub. “If you were doing traditional manufacturing you’d have to go in and you’d probably have to switch out the mold, you’d have to bring in different individuals who maybe train on different products — so it makes it more challenging to be able to execute — especially customizing to-order pieces.”

Customization is a key component of what the company wants to do. Embracing the concept of producing what the customer needs versus making guesses, Raub says. In the process, waste is also reduced.

The company just opened its online shop to customers in October 2020, but the CEO envisions a future where a customer could send back a piece they held onto for a while but maybe want it modified or expanded to better fit a new home, for example. With 3D printing, the changes could be accomplished easily.

The materials themselves are sourced from items like corn husks, cassava and beetroot. Model No.'s suppliers grind the materials down into a non-petroleum-based plastic, which is then formed into pellets the size of BBs.

The company receives these pellets in bulk and uses them to assemble their furniture pieces through 3D printing.

In addition to the plant-based plastic, the company makes use of sustainably sourced or reclaimed wood or other sustainable materials such as aluminum — which is a heavily recycled product.

It's a new avenue for a technology that has taken off in recent years.

“There’s a lot of advancements that are happening right now in 3D printing but not in the furniture space,” Raub says. “There’s no one out there who’s using 3D printing to make their furniture.”

Even without the agricultural waste element — 3D printing on its own is inherently more green than traditional manufacturing. In traditional manufacturing, raw materials are whittled away to achieve the desired form, says Patrick Boyd, who serves as the marketing director for EOS North America. EOS is a company with a mission to promote the use of the more sustainable practices of 3D printing worldwide.

“This traditional process results in inefficiencies, including wasted raw materials,” Boyd says. “Using lasers and other methods, a precise amount of material required is fused to solidify a part into the specified shape, meaning only two pounds of material is required for a two-pound part.”

That is in comparison to maybe using five pounds of material for a two-pound part using traditional methods, Boyd adds.

Examples of 3D printing run the gamut from airplane parts to clothing manufacturing, lighting fixtures and even transforming children's artwork into jewelry.

One woman is bringing 3D printing to the masses with her online forum Plastic Hackers which encourages consumers to re-use plastic waste in their own 3D printers. The founder Rexx Thomas sees average consumers owning 3D printers in the not too distant future.

The Avens chaise. (Credit: Model No.)

“I think it is just around the corner before every person has a 3D printer in their home,” says the Portland, Oregon resident who says she bought her own 3D printer a couple of years ago for $300. “Soon you won't go to the store to buy your kid that toy, you'll just download the file and print it.”

For Model. No., Raub sees the furniture industry as one that's overdue for addressing the waste in manufacturing and says the company is committed to creating a cleaner product that is better for the consumer in addition to the planet.

“I think the furniture industry is the one industry where — if you look at how big it is and how many items are sold now — this is an extreme thing where people are finally going to wake up and realize not only is there so much waste but I think there's just a lot of off-gassing and lot of toxins that are going into the materials too that are in one’s home that people just don’t realize,” he says. “I think that’s something that we’re really taking a bold look. It’s something we want to challenge and see the huge opportunities.”