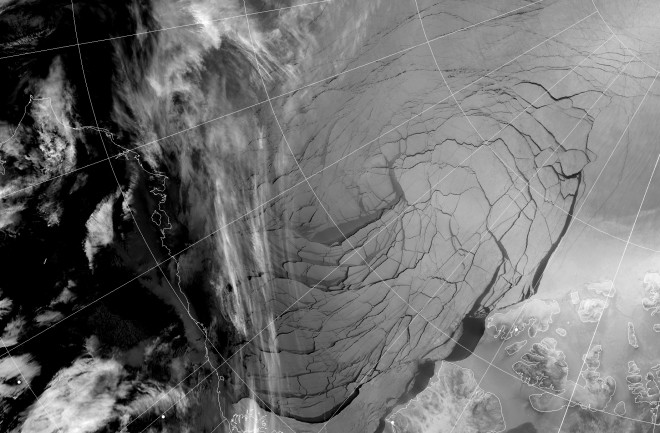 Fractures in the sea ice off the coast of Alaska and Canada can be seen in this satellite image captured on March 8, 2013. (Image: Environment Canada) Beginning in late February, Arctic sea ice in the Beaufort Sea began rupturing, resulting in gigantic fractures that stretched across some 1,000 miles of territory— from Barrow, Alaska, to Ellesmere Island in the Canadian Arctic. Those fractures are clearly visible in the satellite image above. You can see the coast of Alaska outlined on the lefthand side of the image. The Canadian coast is toward the bottom and the right. In its regular sea ice update on March 7, the National Snow and Ice Data center took note of the event, ascribing it to a storm that passed over the North Pole on February 8. It also noted that while this was the proximate cause, there was a more fundamental factor at work:

The large area of fractured ice is located in predominantly first-year ice, which is thinner and easier to fracture than thick, multiyear ice. Similar patterns were observed in early 2011 and 2008, but the 2013 fracturing is quite extensive.

Multiyear sea ice has been on the decline in the Arctic Ocean. In fact, between mid-March and late August 2012, it declined by 33%, and the very oldest ice, meaning older than five years, plummeted by 51%, according to the NSIDC. These images map the decline:

The age of the ice cover in spring and at the end of summer in 2012 is shown in this pair of images. Thinner first-year ice is easier to fracture, and also tends to melt rapidly in summer. The oldest ice, which has survived five or more summers, declined by 51% over the period. (Image: M. Tschudi and J. Maslanik, University of Colorado Boulder) For more in-depth information about what's going on, have a look at the Arctic Sea Ice Blog, where I first saw this spectacular animation showing the evolution of the fracturing:

Sea ice fractures open and expand in the Beaufort Sea, as seen in this animation of images captured by the satellite-borne AVHRR instrument. Overall, the frigid temperatures of winter have caused Arctic sea ice to near its maximum extent for the year. As temperatures rise, it will begin shrinking. In February, the extent of the ice was 980,000 square kilometers, or 378,000 square miles, below the 1979 to 2000 average for the month. According to the National Snow and Ice Data Center, this is the seventh-lowest extent for February seen in the satellite record.