These Photos Offer a Stark View of Rising Seas in Georgia 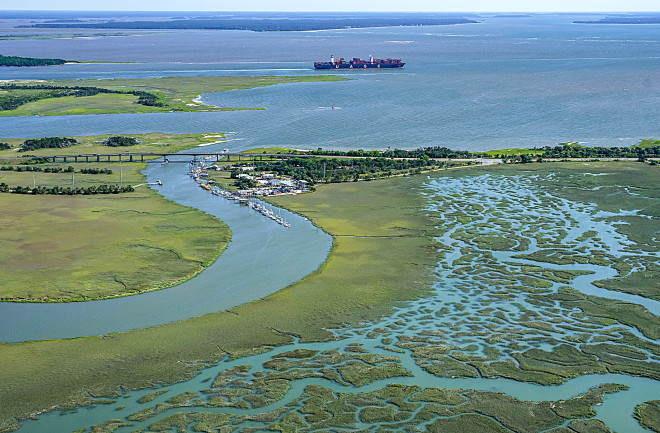 The last few miles of U.S. Route 80 run through a stretch of marshland off the coast of Savannah, Georgia where floods routinely frustrate drivers. The floods weren’t always so frequent or severe, but in the century since Route 80 was designated a federal highway, local sea levels have risen around 9 inches, according to measurements taken nearby, helping floodwaters reach further inland. Today, officials are elevating parts of the road to cope.

Up and down Georgia’s 110-mile coastline, locals are facing unprecedented floods thanks to climate change. Melting ice caps are adding more water to the oceans, while higher temperatures are causing the water to expand, raising sea levels. The effect is more pronounced in the Southeast, because, while the sea is rising, the land is also sinking.

During the last ice age, massive ice sheets covered much of the Midwest and Northeast. The weight of the ice caused the land underneath to sink, which, in turn, caused the land beyond the ice sheets to rise, in something like a see-saw motion. When the ice melted, the see-saw rebounded: the land rose in places that had been covered in ice and sank in places, like the Southeast, that had been ice-free. That process is still underway in Georgia, and it’s making sea level rise more dramatic. The results, captured here in photographs, are striking.

An elevated home on Tybee Island. This area flooded during Hurricane Matthew, and then again during Hurricane Irma, spurring some residents to raise their homes. (Credit: Teake Zuidema for Nexus Media News)

On Tybee Island, where Route 80 comes to an end, sea level rise has exacerbated the threat from hurricanes by adding extra water to storm surges. During 2017's Hurricane Irma, the tide reached 12 feet, the second-highest level on record. Floodwaters filled the streets and devastated homes. Today, a dozen Tybee Island homeowners are raising their houses 11 feet above base flood elevation with the help of a federal grant that is covering 85 percent of the cost, estimated at around $150,000 per home.

The rivers, sloughs and marshes along the Georgia coast are habitats for many creatures, including this young American alligator, seen on a muddy bank of the Altamaha River in Darien. (Credit: Teake Zuidema for Nexus Media News)

Coastal wilderness, the home of creatures like the American alligator, is vulnerable to sea level rise as well. Seawater is penetrating further inland, reaching the roots of long-lived oaks and tupelos. Saltwater is poisoning these trees, killing them off slowly. What’s left are so-called “ghost forests,” graveyards of dead and dying hardwood trees.

The beaches on Tybee Island must be replenished every seven years with sand from the ocean floor, as the beach erodes. Sea level is accelerating erosion. (Credit: Teake Zuidema for Nexus Media News)

Teake Zuidema is a writer and photographer based in Savannah, Georgia. He contributes to Nexus Media News, a nonprofit climate change news service. Aerial photography was made possible by pilot Chris Carmel and SouthWings.