These Hidden Volcanoes Erupt With the Force of Nuclear Weapons 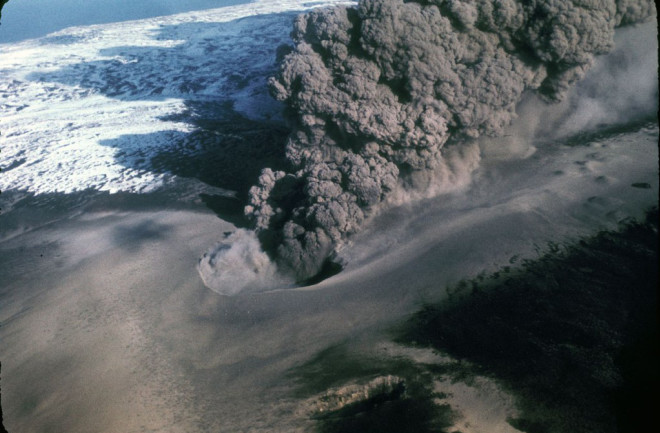 The 1977 eruption of maar volcano Ukinrek in Alaska. Image by Juergen Kienle Volcanic eruptions produce some stunning scenes, the eruption of the Calbuco volcano in Chile being one recent example. Calbuco fits the stereotypical image of a volcano: a large, angry mountain rising up into the sky, the same kind of volcano as Mount St. Helens or Mount Fuji. But some of the world’s most powerful volcanoes – and the second most common – are hidden from sight and can unexpectedly detonate with the force of a nuclear bomb. Maar volcanoes are strange: they are often invisible for much of their life, before suddenly appearing in enormous explosions. They give no warning of their impending destruction. When they do erupt in a cataclysm of fire and noise, they do not rise above the ground, but instead leave a hole similar to large meteorite impact craters. The 1886 eruption of Rotomahana on the north island of New Zealand was one such eruption. With the only warning coming from a small, insignificant earthquake in the region beforehand, a maar volcano-forming eruption suddenly occurred overnight. The resulting heat blasts and descending hot ash and lava bombs killed at least 150 people.

These unpredictable volcanoes leave volcanologists such as myself with two important questions: how do these volcanoes form, and where does all their explosive energy go? Without a visible volcano left to study after the eruption, these questions have long puzzled researchers. Recent experimentation has shed some light on how these volcanoes form. By unleashing compressed air blasts into boxes full of tiny glass beads, we’ve managed to replicate these volcanoes in a laboratory setting. By adjusting the power and location of the blasts, we have discovered that these volcanoes are even more peculiar than initially thought. These underground explosions move the material above them so fast and so energetically that the whole system behaves like a fluid but without any actual melting taking place. In this way, maar volcanic explosions are much more akin to subterranean nuclear weapon detonations than to other volcanic blasts.

And in fact, detailed calculations of the energy released by the 1886 Rotomahana eruption show it’s an apt comparison. My research has found that this eruption released, in just a few hours, a hundred million billion joules of energy (100,000,000,000,000,000). This is the same scale of energy that was released during the detonation of the nuclear warhead “Tsar Bomba” over Russian territory in 1961 – the most powerful nuclear weapon ever created. It seems that these maar volcanoes are nature’s nuclear bombs – just without the accompanying radiation.

These volcanoes are problematic for volcanologists, not just because they erupt unpredictably, but also because when they do erupt, their incredibly violent, paroxysmal eruptions destroy any structure that forms during the eruption. What’s more, maars are often “monogenetic” volcanoes, meaning they only undergo one eruptive episode before becoming extinct, never to erupt again. These volcanoes are truly ephemeral.

The Ukinrek Maar crater, as seen in 1990. Paradoxically, they are the second most common volcanoes by number, observed all across the world, from Italy to Arizona to Antarctica. But volcanologists have almost always found them long after they have erupted. Few historical eruptions of maar volcanoes have been witnessed and none have been scientifically recorded. Even during the two most recent observed examples, 1965 at Taal in the Philippines and in 1977 at Ukinrek in Alaska, no scientific recording equipment was available. Research groups all across the world, including the group I am part of, are currently investigating the eruption styles and formation mechanisms of these mysterious volcanoes. But though field researchers have made massive strides in unraveling these volcanoes’ subterranean structures, it remains for mathematical and experimental volcanology to reveal their deeper secrets in the lab.