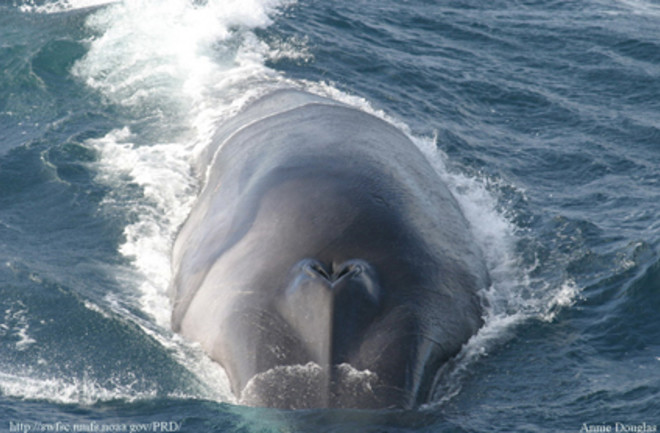 Whales don't wear sunscreen. And because these massive sea mammals must surface to breathe, they are being exposed to more and more ultraviolet radiation sneaking through the weakened ozone layer. According to Karina Acevedo-Whitehouse, lead author of a study in the Proceedings of the Royal Society B, some whales are getting serious sunburns at an alarming rate. From 2007 to 2009, her team sampled fin, sperm, and blue whales in the sun-drenched Gulf of California, which is the long, skinny expanse of water between mainland Mexico and Baja California.

Nearly all of the skin samples contained "sunburn cells," abnormal cells associated with ultraviolet-induced DNA damage. These indicators were even found in the lowest layer of skin on the whales, suggesting that those individuals were suffering from very severe sunburns. [Discovery News]

Pathogens can also cause skin lesions in whales, but Acevedo-Whitehouse says the severity and the signature of sun damage suggests a large role for UV radiation. In all, the scientists studied 150 whales; 95 percent showed some sun damage and 56 showed damage down to the lowest layer.

And, just as in humans, the lighter-skinned blue whales suffered more from the sun's rays, whereas the darkest whales, the fin whales, had the fewest abnormalities. Although darker than blue whales, sperm whales had almost the same amount of sun damage, perhaps because they spend more time at the surface breathing between dives, the researchers speculate. Also like fair-skinned humans, the blue whales seemed to respond to the sun's rays by producing more pigmented cells, which help repair sun-damaged skin and protect it from UVR [ultraviolet radiation]. [ScienceNOW]

Based on what we know of our own anatomy, this level of sun damage to the skin would be bad news. But does whales' increased exposure mean they are at increased risk for skin cancer, or simply that they're tanning?

So far, there were no indications of skin cancer among the whales studied, although [coauthor Laura] Martinez-Levasseur, who is also a Ph.D. student at Queen Mary, University of London, noted that only tiny samples were taken of the massive animals. She said one of her next projects will be to examine how well whales' cells hold up under the increased UV radiation — and whether whales' pigmentation darkens as a result of their time spent out in the sun. [AP]

Let's hope the whales can cope. Despite successful reductions in ozone-depleting molecules like CFCs

, it could be decades before the ozone

80beats: Nobody Panic: Wearing Sunscreen Is Unlikely to Be a Cancer Risk