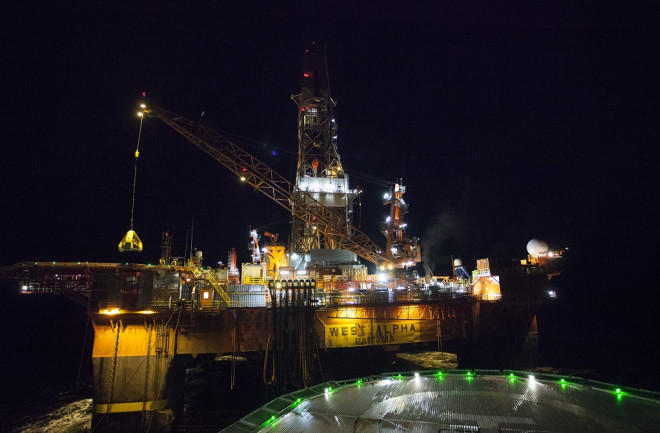 Rosneft, a Russian petroleum company, completed drilling the northernmost well in the world – the Universitetskaya-1 well in the Arctic — this past September. (Source: Rosneft) In 2010, representatives of 193 governments agreed to limit global warming to less than 2°C above pre-industrial levels. The goal is to avoid 'dangerous interference with the climate system.' Four years later, a widely publicized study concluded that if we are to keep to that goal, all Arctic fossil fuel resources "should be classified as unburnable." Moreover, there can be no increase in production of unconventional oil, including oil shale and tar sands. Now, while attending the Arctic Frontiers conference in Tromsø, Norway, I've learned a few things that make me highly skeptical that those Arctic oil and gas reserves will be left unburned, and that global warming will be held to under 2 degrees C. For evidence, you need go no further than the image above. It shows that drilling in the harsh Arctic environment is already proceeding apace. The photograph is of the West Alpha rig in Russia's Kara Sea. In September, it successfully drilled the northernmost well in the world — and into an oil province where oil and gas resources are thought to be comparable in size to the resource base of Saudi Arabia, according to Rosneft, the Russian petroleum company that completed the well. Considering the agreement amongst so many of the world's nation's to avoid dangerous climate change, should drilling like this continue? This question was posed at the conference today to Victor Martynov of Gubkin Russian State University of Oil and Gas. His unhesitating reply: "Absolutely. There is no substitute." With consumption of oil and gas forecast to increase 50 percent by 2040, "there is no alternative," he argued. The Norwegian government today took a big step that shows it agrees with Mr. Martynov: It opened 54 blocks above the Arctic Circle in the Barents Sea for possible oil exploration. Some of those blocks have previously been in off-limits areas because of dangerous sea ice. But the Norwegian government said new research indicates Arctic sea ice has receded enough to proceed there (a contention disputed by some experts, as well as activists). This highlights the 'polar paradox' — the idea that global warming is opening the Arctic for oil and gas exploration, and that by burning Arctic oil and gas we will make limiting global warming increasingly difficult. (For more on the paradox, see my post from yesterday.) As for unconventional oil resources, I can't imagine any slow down there — and the total potential resource may be mind-bogglingly huge. "The oil and gas in unconventional reservoirs may be equal to all the oil and gas that humankind has burned previously," Greg Leveille of ConocoPhillips said at the Arctic Frontiers conference yesterday. He helps oversee development of unconventional oil and gas resources for the company. Of course, there is no question that we still need oil for transportation and agriculture, and natural gas to hasten the transition away from the worst fossil fuel, coal. And developing these resources brings economic benefits to many people. (Just look at modern Norway, which was built on the revenue derived from oil and gas.) But the science is also clear: exploiting the Arctic for its fossil fuel reserves, and increasing production of unconventional oil and gas, will make avoiding dangerous interference with the climate system exceedingly difficult, if not impossible.