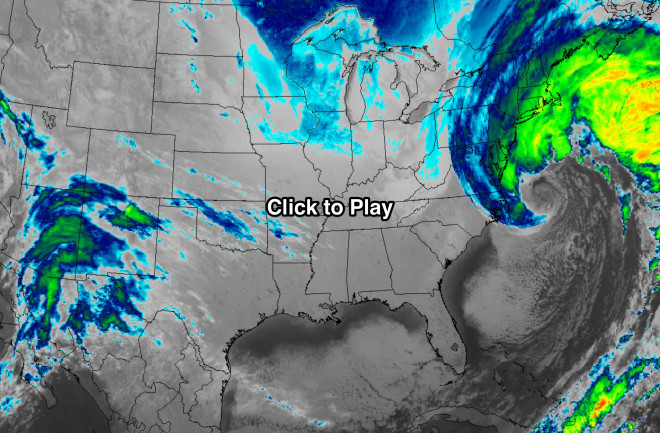 An animation of images acquired by the GOES-16 weather satellite shows a strong winter storm undergoing a phenomenon known as "bombogenesis." Click on the image to watch the animation created by the Cooperative Institute for Meteorological Satellite Studies. (Source: CIMSS Satellite Blog) Last night, my daughter called me from New York City to ask worriedly about the so-called bomb cyclone that was threatening the northeastern United States. "What is this about a bomb?," she asked. I explained that the term comes from a meteorological process called "bombogenesis." It happens when a midlatitudecyclone rapidly intensifies, dropping in pressure by at least 24 millibars over 24 hours. A millibar is a measure of atmospheric pressure. This can happen when warm, moist air streaming up from the south collides with cold, dry air dropping down from the northwest. That's exactly what happened overnight off the U.S. Eastern Seaboard on Jan. 3 and 4, 2018. You can watch the evolution of the bomb cyclone by clicking on the image above to access an animation created by the Cooperative Institute for Meteorological Satellite Studies.

Warm, moist air from the south wraps around and into the low pressure system at the cyclone's center. At the same time, cold, dry air from the northwest also wraps into the system. The result: a comma-shaped bomb cyclone. (Image: CIMSS. Annotation: Tom Yulsman) The animation consists of images acquired by the GOES-16 weather satellite. It shows strong cyclonic circulation at the surface, as well as warm, moist air streaming up from the south and wrapping into the low pressure at the cyclone's center. The animation begins at 8 p.m. EST on Jan. 3, and ends at about 8:30 p.m. on the 4th. With the storm heading toward New England, it was forecast to bring heavy snow, high winds, and potentially damaging storm surges. The annotated GOES-16 image above shows how this works. Here is a closeup view from CIMSS of the storm as it was rapidly deepening off the East Coast:

An annimation of GOES-16 satellite images of the storm. (Source: CIMSS) As I was writing this on the afternoon of Jan. 4, the National Weather Service had reported 14.6 inches of snow in Taunton, MA. The forecast was for blustery winds and extreme cold. The weather service was also predicting moderate to major coastal flooding, with the worst along Cape Cod, and north through Boston and up into Maine.