The Vicious Valparaiso Wildfire as Seen From Space 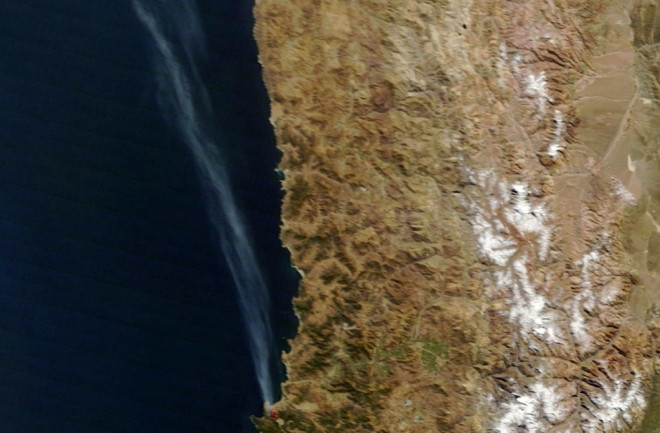 NASA’s Terra satellite acquired this image of the wildfire that swept through Valparaiso, Chile at 11:10 am local time on Sunday, April 13, 2014. (Source: NASA Earth Observatory) As a raging wildfire swept through Chile's coastal city of Valparaiso last weekend, destroying 2,000 homes and killing at least 15 people, NASA's Terra satellite captured this image of the blaze as it passed overhead. A plume of smoke is clearly visible streaming northwestward over the Pacific Ocean from areas outlined in red where the Moderate Resolution Imaging Spectroradiometer (MODIS) on Terra detected fire. The cause of the Valparaiso wildfire is still unknown, but it appears to have begun in a forest draping the steep and heavily populated hills. As of Monday, firefighters were still battling flames in some areas.

Primed by hot temperatures and dry conditions, and whipped by high winds, the blaze raged through densely populated neighborhoods. And as the New York Times reports:

. . . critics say that lack of urban planning and government neglect of the impoverished communities on the hilltops contributed to the disaster just as much as the wind and heat.

For decades, Valparaíso has expanded with no regulation or urban planning, leading to improvised, chaotic collections of wooden houses along high roads and gorges, which are often used as informal waste dumps. Many fire hydrants did not work on Saturday when the fire first broke out, and emergency vehicles were not able to reach some neighborhoods because of the curved, narrow roads, or because there were no roads at all.

About 250,000 people live in Valparaiso. The spectacular and historic center of the city was declared a UNESCO World Heritage site in 2003.