The U.S. climate became afflicted by split personality disorder in 2018

Meanwhile, the Earth as a whole continues to ride the up-escalator of human-caused global warming

2018 was the fourth warmest year on record globally, part of a decades-long warming trend. (Source: NASA Goddard Media Studios) Two U.S. agencies have reported on how Earth's climate fared in 2018. For the most part, the news wasn't all that surprising: The long-term trend of human-caused global warming showed no significant signs of relenting. But I was surprised by one finding: The United States experienced something of a split climatic personality last year. More about that in a minute. First, though, NASA and the National Oceanic and Atmospheric Administration announced yesterday that Earth experienced its fourth warmest year in records dating back to the late 1880s. "Across the globe it was extremely warm, with only a few places that were slightly below normal," observed Gavin Schmidt, director of NASA's Goddard Institute for Space Studies, during a phone briefing with reporters that I participated in. The planet continues to warm over the long term, and "it's because of the greenhouse gases we’ve put into the atmosphere in the last hundred years."

Yearly temperature anomalies from 1880 to 2018, with respect to the 1951-1980 mean, as recorded by NASA, NOAA, the Japan Meteorological Agency, the Berkeley Earth research group, and the Met Office Hadley Centre (UK). All five show peaks and valleys in sync with each other, along with rapid overall warming overall. (Source: NASA Earth Observatory/Joshua Stevens) Deke Arndt, chief of the monitoring section at NOAA's National Centers for Environmental Information, likened what's happening to "riding up an escalator over time and bouncing up and down on that escalator." The ride up is global warming, while the bouncing up and down are natural climatic variations caused by such phenomena as El Niño (which tends to cause warming) and La Niña (which cools things off). As seen in the animation above, five independent analyses agree on the details of that metaphorical escalator ride — a striking concurrence. But I found the analysis of what happened climatically in the United States last year even more striking. The nation experienced it's 14th warmest year in a record stretching back 123 years. That puts 2018 in the top 10 percent of warm years nationally. Noteworthy, for sure. But much more so was the pattern of U.S. climate anomalies in 2018. 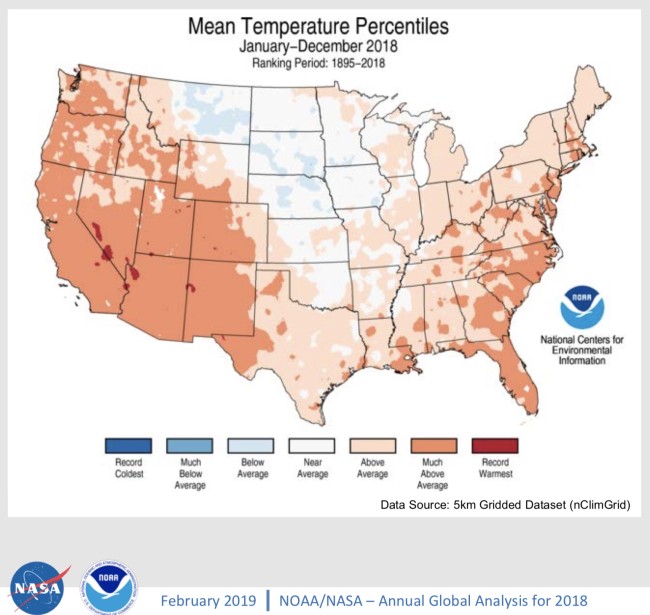 As seen in the map above, the Northern Plains and parts of the Upper Midwest were among those few places globally that were a little cooler than normal last year. But in stark contrast, much warmer than average conditions prevailed from the Rockies all the way west to the Pacific Ocean. And when it came to precipitation, the dichotomy was even more dramatic:

Overall, the United States experienced its third wettest year. You have to go all the way back to 1983 to find a wetter one. But in the graphic above, check out the stark contrast between the United States east of the Rockies and west of the Rockies. The eastern two thirds of the country were exceedingly wet in 2018 — and nine states actually experienced their very wettest year on record. According to NOAA's Deke Arndt, climate change played a role, in this way: The warming has allowed the atmosphere to carry more water vapor, and thus the storms that hit the eastern part of the country dumped even more rainfall than they would have otherwise. Meanwhile, the western third was mostly dry — and some parts of the region were really dry. As Arndt put it: “ There is an entrenched and very intense drought, frankly, in the Four Corners region." 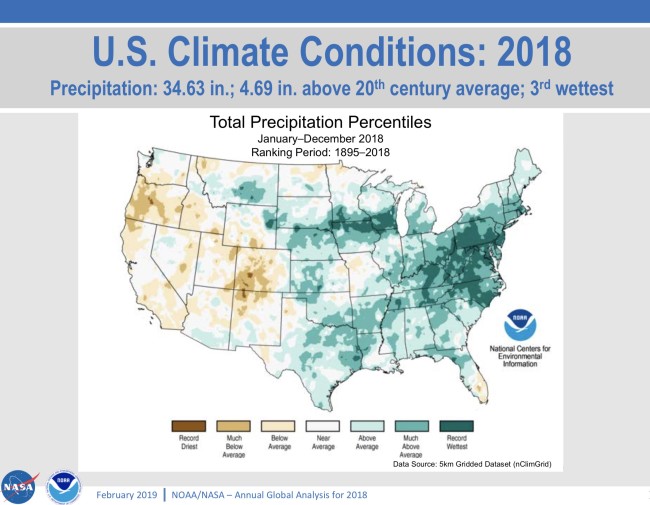 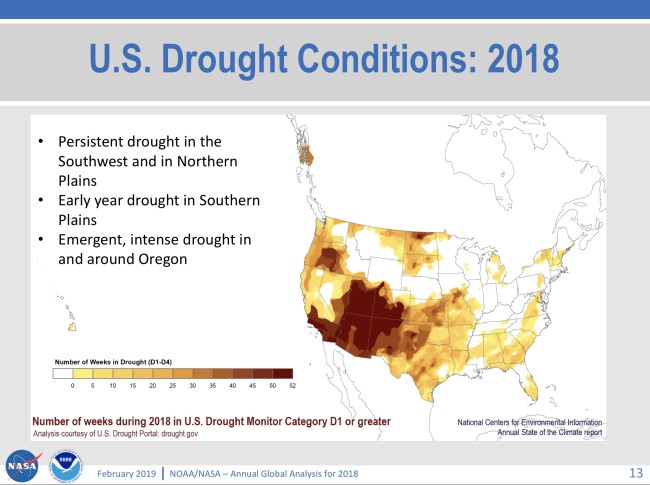 Drought is not just about the amount of precipitation that falls from the sky. Other important factors contributing to drought include temperature and soil moisture. Considering those and other factors, the situation in a broad swath of the southwestern United States was quite bleak in 2018. In the map above, all the areas colored in dark brown were considered in drought for every single week of the year. This is a continuation of very dry conditions dating back to the beginning of the 2000s. This drought, and increasing demand for water, have caused water levels in Lake Powell and Lake Mead — the two giant reservoirs on the Colorado River — to drop significantly. This has raised fears of coming water shortages in the Colorado River Basin, from which 40 million people in seven states draw water. With this in mind, I asked both Arndt and Schmidt whether they thought the dry conditions were indicative of an emerging new normal for the region. Arndt was fairly cautious in his response: “In the late 1990s, we entered into a persistent period in which the extent, intensity and frequency of drought have increased. But I am not prepared to say that this is the new normal.” Schmidt went further. He said that in the context of the paleo record, meaning the past 1,000 years or so, the recent dearth of precipitation may not be that unusual. "But the drying that we get in the soil bed from increasing temperatures — that has actually been a significant factor in the intensity of the drought and their impacts.” In this way, human-caused climate change is contributing to ongoing drought in the region. And barring increases in precipitation — which climate models do not predict for the Southwest — drying will continue as temperatures warm further.