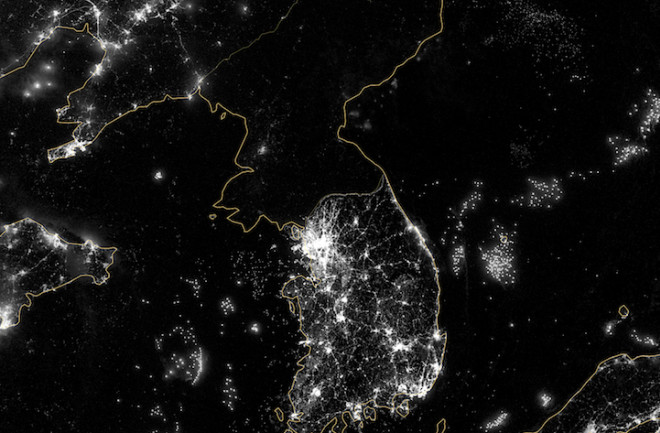 The Visible Infrared Imaging Radiometer Suite, or VIIRS, on the Suomi NPP satellite captured this nighttime view of the Korean Peninsula on Sept. 24, 2012. North Korea is notable in its lack of lights. (Image: NASA Earth Observatory) As North Korea ratchets up its rhetoric, going so far as to say that the Korean Peninsula is now in a "state of war," and reports of cyberattacks on North Korean web sites trickle in, the nighttime image above from the SUOMI NPP satellite shows the essential context behind the bluster. South Korea is lit up like a Christmas tree at night. Meanwhile, except for the faint smudge of light coming from North Korea's capitol of Pyongyang, the country is almost completely dark. In fact, as of 2011, South Korea ranked 12th in the world in electricity production, according to the CIA World Fact Book. In contrast, North Korea ranked 71st (as of 2009). This is not at all surprising when you consider that with a GDP of about $1.6 trillion, the south is 13th in the world, whereas the North's GDP of a paltry $40 billion means it is 103rd. As I write this early Sunday morning, U.S. officials are downplaying the risks, with one being quoted as saying that "North Korea is not going to war." But the story told by this stark remote sensing image has got to make you wonder how much longer such a dichotomy can last.