The Tiny German Village That Went Off the Grid

A small town in Saxony has figured out how to run entirely on biomass—and create an energy surplus. 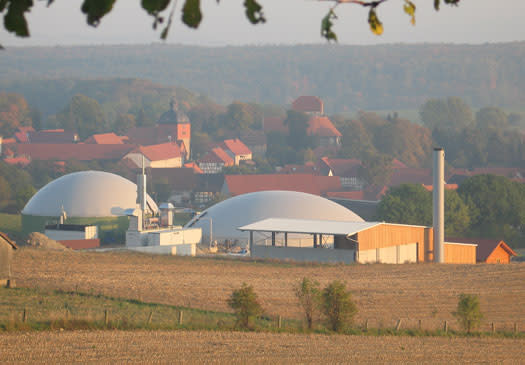 In 1998, the gears began turning to convert Juhnde, a tiny village in Saxony, Germany, into a bioenergy hub that receives every bit of its electricity (and most of its heat) from biomass. The system went live in 2005, and its subsequent success has turned Juhnde into a celebrity in green circles, as well as a model for other bioenergy-seeking towns and cities.

This image shows Juhnde's unique bioenergy plant, with its two domed fermentation silos. The biogas plant has caught the attention of international communities and organizations such as Reynolds, Indiana--a.k.a. BioTown, USA. 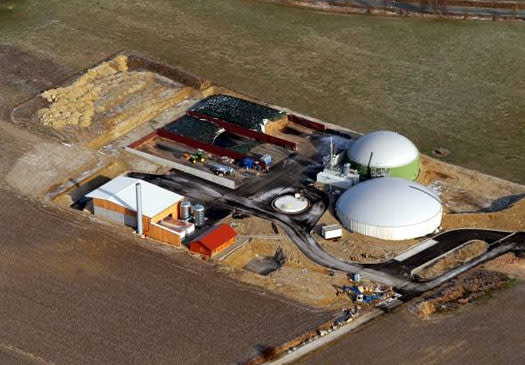 Here's an overhead view of the heat and power generation plant, the keystone of the Juhnde project. This unassuming facility sits on the edge of the village at the base of a hill covered in crop fields. The plant stores and processes energy crops as well as liquid manure. Under anaerobic conditions, micro-organisms digest these raw materials to produce biogas (methane and carbon dioxide), which is then combusted to produce heat and power.

In winter months, when demand for heat cranks up, there are two reserve systems: an additional heating plant fueled by wood chips, and another (rarely used) furnace that burns traditional oil. 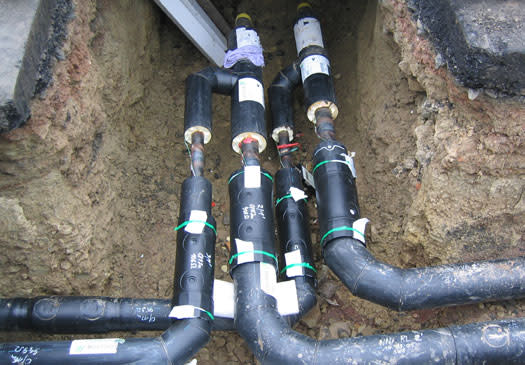 The key to transferring all this heat to the living rooms and bedrooms of residents is hot water. This image shows the hot-water grid in 2005, when it was being installed. According to the University of Gottingen's Interdisciplinary Centre for Sustainable Development--the group that spearheaded the project--the households that participate now receive 100 percent of their heat from the hot water grid. 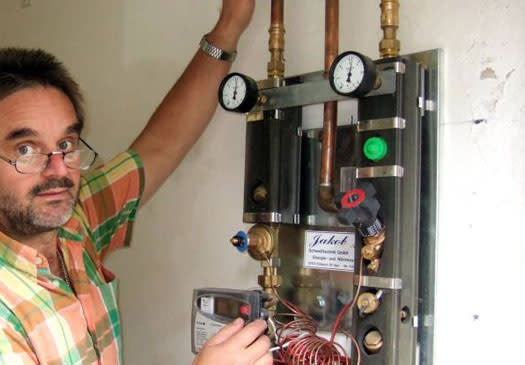 The heating system enters each house via two lines--one for hot water coming in and one for waste water going out. This image shows the small, wall-mounted unit that controls the heat for each household. As the villagers, not to mention Gottingen academics, are proud to demonstrate, there is no need for large boilers and furnaces that dominate space in most basements (and burn oodles of imported and unsustainable fuels). 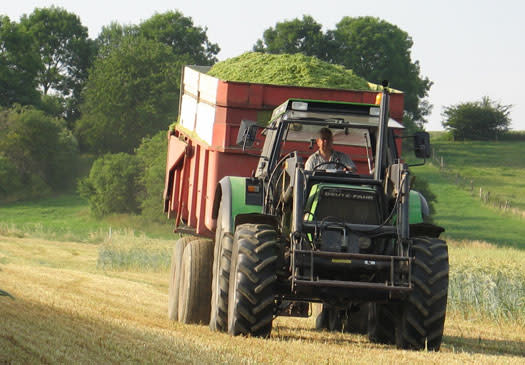 Here's a breakdown of the biomass quantities necessary to heat Juhnde and supply it with energy year-round:

* around 300 hectares of energy crops, which make up 25 percent of the village's total crop yield; and

* 300 tons of wood chips per year, the equivalent of 10 percent of the surrounding forest's annual growth.

In this image, a local farmer drives harvested energy crops to the bioenergy plant, where they will be stored under large tarps until ready for processing. 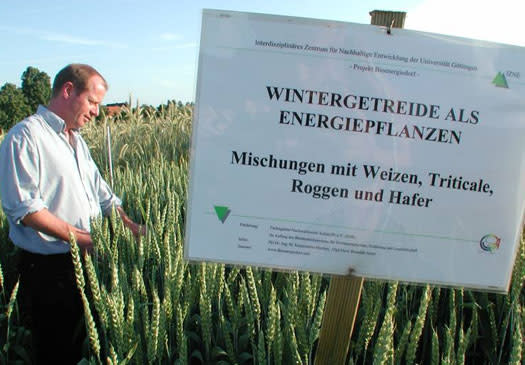 Juhnde is not just an experiment in sustainable energy production--it's also an ecological, economical, social, and agricultural experiment affecting all aspects of the community. The local farmers, for example, use polycultural planting methods to raise multiple species in the same fields, a practice that reduces the need for pesticides and encourages soil preservation.

They also use harvesting and tilling practices aimed at minimizing erosion and nitrate leeching. Plus, the residues and by-products of the fermentation process are collected and used as a fertilizer for the local crop fields, creating a largely closed nutrient cycle. 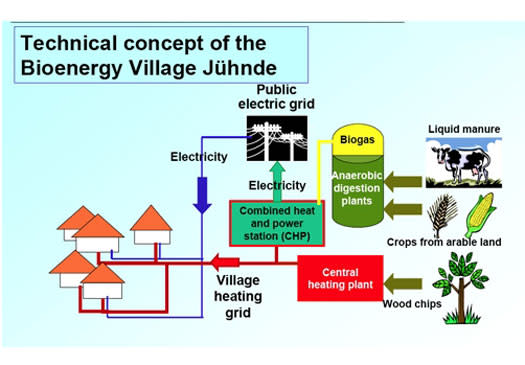 The initial investment for the Juhnde bioenergy village was 5.4 million Euros (US$7.9 million):

* 2.9 million euros for the biogas facility,

* 0.9 million euros for the heating system, and

The funds came from the Bioenergy Village Juhnde Cooperative--which was formed to run the heat and energy business, bank credits--as well as a grant from the German Ministry of Food, Agriculture, and Consumer Protection.

Germany's progressive energy policies have also helped balance the village's books: the Renewable Energy Sources Act of 2000 increased the price of energy paid to small energy producers like Juhnde that contribute power to the national grid, and in 2004 an amendment to the act required big energy companies (E.on in Germany) to buy from smaller, sustainable sources. This diagram shows how all electricity produced at the Juhnde bioenergy plant flows into the public electrical grid. 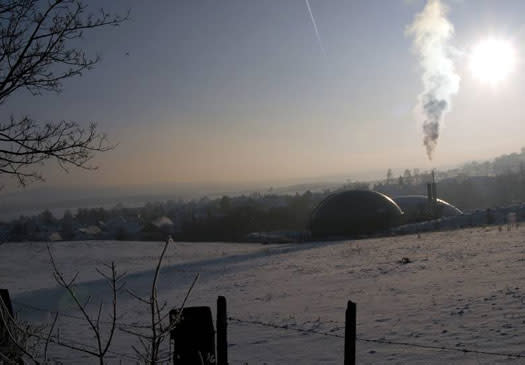 As of 2007, the Juhnde bioenergy village had reduced its carbon dioxide output by 3,300 tons per year, or by 60 percent per capita. The project managers are proud to point out that the village already meets the carbon dioxide reduction goals of the European Union's Sustainable Energy Vision for the year 2050.

Juhnde supporters hope that the smattering of non-grid households in the village will join the cooperative, allowing the village to become completely independent of major energy companies. They're also looking to the bioenergy system to help the community in other, less concrete ways, like encouraging more communal and democratic decision-making.