The Tide Rises—But It's Not the Same Everywhere

All rising sea levels are not equal: The increase is happening more than twice as fast in Argentina as in France. Jerry Mitrovica, a geophysicist at the University of Toronto, has figured out why— and his work may reveal where global warming is having the most effect and where flooding might occur. 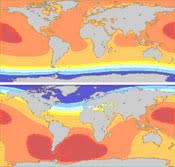 Predicted steep rises in sea level (red) from melting in Antarctica (top) and Greenland (bottom).Courtesy of Jerry Mitrovica/University of Toronto

Melting ice sheets don't cause water to rise equally everywhere, Mitrovica explains, because ice sheets exert a slight gravitational attraction that draws surrounding ocean waters toward them. That means when the sheets melt, they lose mass— and some of their gravitational grip. "When the Greenland ice sheet melts, the total amount of water in the oceans increases, yet sea levels actually fall within 2,000 kilometers [1,200 miles] of that ice sheet."

Mitrovica and his colleagues developed a computer model of the unique pattern of sea-level rise associated with the melting of Greenland, of Antarctica, and of smaller mountain glaciers. When they adjusted the model to match actual sea-level measurements, they saw that Greenland is melting more than current climate models predict— which explains why sea levels are rising relatively slowly around nearby Europe.

Planet EarthA Year in the Arctic: A Close-Up Look at the Biggest Ever Polar Expedition

The SciencesAre Strange Space Signals in Antarctica Evidence of a Parallel Universe?