The Sweet Sound of Seepage: Listening to the Oil Spill 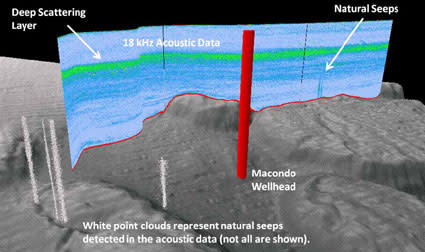 We all heard about the Deepwater Horizon oil spill in the Gulf of Mexico. But what if scientists could have actually HEARD it? In the wake of the disaster, several scientists are working to develop new ways to spot and monitor spills over time using sonar--by propagating sonic waves through the water and bouncing them off oil droplets. Some of this research is being done by Thomas Weber and will be presented today at the Pan-American/Iberian Meeting on Acoustics. Sonar is useful because it can monitor large and deep swaths of the ocean, and could reduce the need to take individual samples or to visually track oil on the water's surface. Weber and his team were the first to try using this technology to visualize the oil, going out on several trips to the site, Weber told ScienceNOW:

"We were really doing crisis science.... There were no proven methods for doing this."

Weber's team used sound waves to probe below the ocean's surface. They found that frequencies around 200 kilohertz were best for tracking the type of oil droplets released from the Deepwater spill, and were able to detect the oil plume, says ScienceNOW

. But those frequencies don't penetrate deep into the water (they max out at about 500 feet), and they couldn't reach the depth of the leaking oil valve (about 5,000 feet). But the team did experiment with using lower frequencies to detect density changes in deeper waters, which were thought to indicate oil plumes, and they're planning to test a sonar system that could be lowered into the depths. After the well was capped, the team returned to the site to look for natural gas bubbles, which are easier to detect at extreme depths. Mapping the natural vents are in the area and watching for gas seeping from the Deepwater well gave them a good idea of the cap's stability. Take a look at the author's write-up here

80beats: 5 Offshore Oil Hotspots Beyond the Gulf That Could Boom–or Go Boom

80beats: Whales vs. Navy: NOAA May Limit Sonar Tests, but Another Case Heads to Court

80beats: Sonar Damage to Dolphins’ Hearing Is Akin to the “Rock-Concert Effect”