The Selling of the Suicide Seeds Narrative 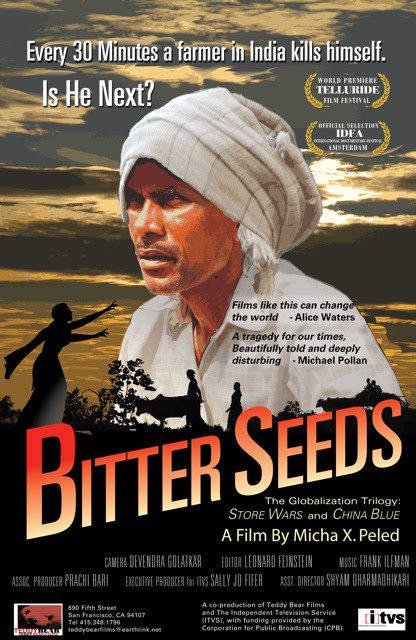 Over the past decade, the story of hundreds of thousands of Indian farmers being driven to suicide because of the failure of their genetically modified cotton crops has circulated widely in the media and of course, in anti-GMO circles. An acclaimed 2011 documentary called Bitter Seeds chronicled the phenomenon. The film's tagline is from a 2011 New York University think tank report. Others have also documented this story with heartrending imagery. The tragedies of the suicides shown in the films and reported in all of the media accounts are real. The reasons often given, however, are false, as I have previously discussed. But the GMO/suicide narrative has persisted because leading environmentalists and influential writers and journalists continue to repeat it. They do this despite evidence to the contrary that has been reported in the Guardian, BBC, Canada's National Post, and elsewhere. Several years ago, Cornell political scientist Ron Herring gave an illuminating talk on this issue, in which he said:

Information flows through what I call authoritative brokers. Where do we get information we trust, especially with the Internet, and with the explosion of sources of information? None of us can incorporate all the possible sources of information and adjudicate them. Even if we could, we don’t have time. Most people don’t have the kind of expertise that’s required to understand what’s involved with genetic engineering of a crop. So we are dependent on brokers-- all of us are.

Here's a paper by Herring that elaborates on how "epistemic brokers" have sown global opposition to agricultural biotechnology. The successful propagation of the GMO/Indian farmer suicide narrative is a case study that is as fascinating as it is abhorrent. Nobody has unpacked it better than Herring. Here's another paper of his from 2006 that reveals how the "suicide seeds" myth originated and why it failed to convince Indian farmers. Still, as Herring and N Chandrasekhara Rao write in this 2012 article for the journal Economic and Political Weekly:

Much of the world believes that Prince Charles was correct in his 2008 pronouncement in New Delhi: "I blame GM crops for farmer suicides." India has been a major source of the global narrative of catastrophe. Transgenic cotton seeds in India have been characterized not only as "suicidal," but even "homicidal," and finally, "genocidal" in prominent commentaries about rural India emerging from India and subsequently diffusing through global networks and media. The catastrophe narrative is widely distributed but devoid of evidence.

Building on the work of Herring and other scholars, I have a long piece just published in

Issues in Science and Technology

that tells how this "suicide seeds" narrative was constructed, why it's wrong, and why it endures. UPDATE: In response to this this Nature article, Vandana Shiva, the prominent environmentalist who is a relentless promoter of the GMO/Indian farmer suicide narrative (which I show in my piece), recently said this:

Shutting out evidence from reality is a completely unscientific approach. Reality cannot be cooked up in papers, no matter how prestigious the journals in which these concoctions are published.

Additional information:Read this from UK journalist Leigh Phillips (section halfway down piece called "Those Infamous Suicides in India"); this post by Siddhartha Shome, who drills down into what he rightly calls a "highly complex and multidimensional phenomenon"; this piece from India Forbes; and finally, this post from anthropologist Glenn Stone, who too notes: "Most of what is said on the issue spreads through highly polarized agenda-driven information networks." (Interestingly, Stone is dubious about the success of Bt cotton in India. Herring argues persuasively that he is in denial.)