How might it influence our winter weather? One thing's for sure: It's bad news for the drought-stricken West. 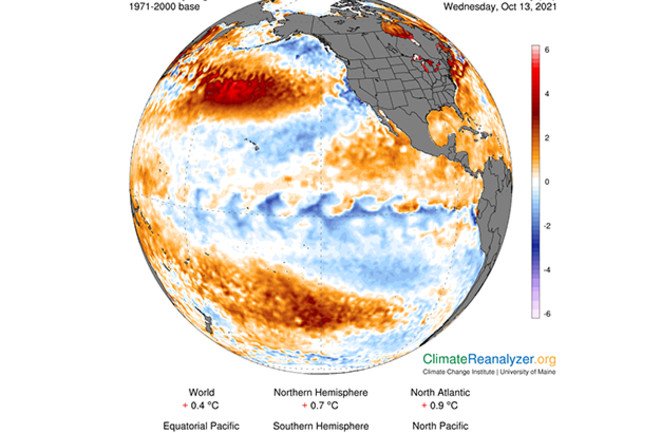 In this map showing how sea surface temperatures departed from average on Oct. 14, 2021, a vast swath of anomalous chill extends along the equator west of South America. This is characteristic of the La Niña climate phenomenon. (Credit: Climate Reanalyzer)

It's official now: After a five-month respite of neutral conditions, the National Oceanic and Atmospheric Administration says the second La Niña in two years is here — and it's already influencing our weather.

"We’ve already seen one likely effect of La Niña this year — a more active Atlantic hurricane season, with nearly twice as many storms as average so far," according to Emily Becker, a climate prediction expert and lead author of NOAA's ENSO Blog. "But the most substantial La Niña effect on North American rain, snow, and temperature happens during winter."

As a result, the more than 60 million people living in the drought-stricken southwestern quadrant of the United States are now likely to experience the second blow in a debilitating double punch to the gut.

That's because La Niña winters tend to be drier than usual in this region — and that was certainly the case last year. In fact, the region has already been reeling from a 20-month period with the lowest total precipitation and third-highest daily average temperatures since 1895.

Now, thanks to this second La Niña, the region is unlikely to get significant relief this coming winter.

In fact, the impact on atmospheric circulation patterns influencing precipitation over North America seems to be stronger in the second winter of a double-punching La Niña. (Caveat: This is not a slam dunk conclusion, because scientists are working with a rather limited observational record.)

Other typical impacts of La Niña on North American weather include:

NOAA forecasters say there is nearly a 90 percent chance of La Niña continuing through February. They are that confident for a number of reasons, including this one:

This animation reveals a massive blob of anomalously cool water beneath the surface of the Pacific Ocean west of South America. (Credit: NOAA Climate.gov animation, based on data from NOAA's Climate Prediction Center.)

The blob of cooler than normal sub-surface water seen in the animation above has been keeping a vast swath of the equatorial Pacific cooler than normal. This is, in fact, a hallmark of La Niña. And there's clearly a very big supply to keep the surface cool for awhile.

That, in turn, is expected to keep influencing the atmospheric circulation at least through much of the winter — with all the possible downstream impacts on our weather.

All that cool water also makes it very unlikely that 2021 will set a new global warming record. The year is likely to finish as the sixth or seventh warmest on record, according to climate scientist Gavin Schmidt, Director of the NASA Goddard Institute for Space Studies.