The Philippines is about to get the most unwelcome Christmas present imaginable: Super Typhoon Nock-ten 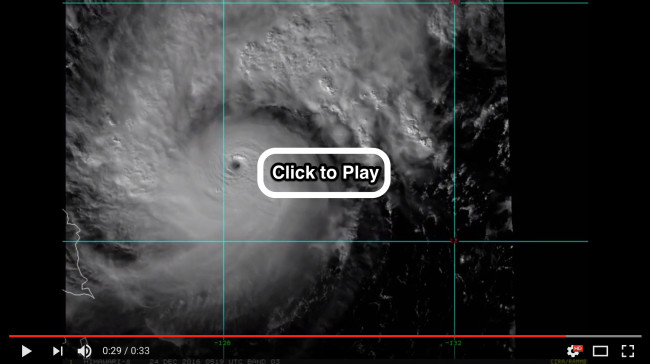 An animation of images from the Himawari-8 satellite shows the evolution of Super Typhoon Nock-ten in the western Pacific over a 31-hour period between Dec. 23 and 24, 2016. Nighttime falls part of the way through the animation, and the screen goes dark. Make sure to keep watching. Overnight, the cyclone becomes much stronger and well-developed — as is evident when light returns and Nock-ten is visible again in the animation. (Source: CIRA/RAMMB) Super Typhoon Nock-ten is swirling toward a Christmas Day landfall as a Category 3 or 4 storm on the Philippine island of Catanduanes. With winds gusting as high as about 140 miles per hour, Nock-ten could have a devastating impact. After landfall, Nock-ten is forecast by the Joint Typhoon Warning Center to churn westward and pass close to Manila on December 26. It should rake the city and the highly populous island of Luzon with heavy rainfall and sustained winds of about 90 miles per hour. At the Category 6 blog, Weather Underground meteorologist Jeff Masters reports:

The projected track and intensity of Nock-Ten over the Philippines are similar to that of Typhoon Rammasun of July 2014, which killed 106 people and did $871 million in damage to the country, making it the third costliest typhoon in Philippines’ history, behind Haiyan of 2013 ($2 billion) and Bopha of 2012 ($1 billion.)

Nock-ten is a rare bird — only seven typhoons ranking as Category 3 or higher are on record as striking the Philippines in December, according to Masters. The western North Pacific has seen its share of strong typhoons in recent years. In 2015 in particular, tropical cyclone activity in the region — as measured by "accumulated cyclone energy," or "ACE" — was the most intense on record. An extremely strong El Niño played the primary role in juicing up this cyclone activity. But human-caused global warming also raised the odds that 2015 would see such an intense cyclone season in the western North Pacific, according to a recent study published by the American Meteorological Society. I'll have more to say about this in a future post.