The New York Times on Hurricane Policy, and More

In anticipation of the start of hurricane season, today's Science Times had a pairof great articles on hurricanes, global warming, and coastal defenses in the U.S. I have just put up a post at Huffington Post, entitled Risky Scenarios, that comments on the latest Times package. You can read it here. 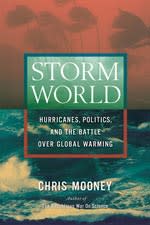 Meanwhile, my forthcomig book about all of this, Storm World, has gotten another positive early review--this time from Booklist, which is published by the American Library Association. Here's what gets said:

Storm World: Hurricanes, Politics, and the Battle over Global Warming.

Mooney, whose The Republican War on Science (2005) offered a hard-hitting look at the political manipulation of scientific research, turns his attention to the hot topic of global warming. Does global warming cause increasingly vicious hurricanes? Is human arrogance and disregard for the environment responsible for Hurricane Katrina's devastation of New Orleans? Or is this whole idea a lot of hot air? Mooney looks carefully at all sides of the debate, weighing the evidence carefully, telling us not just what's being said but who's saying it and why. Of course, it's impossible to write a book like this without tackling the whole idea of global warming as myth, but Mooney doesn't get bogged down in the politics of that issue. He has different questions to answer: Are the increasingly intense hurricanes of recent years our fault, and if they are, what can we do to change the pattern before it's too late? His answers don't add to cheerful reading, but this is certainly one of the most thought-provoking and accessible accounts of climate change to appear since Katrina. -- David Pitt

The official Storm World website, which includes a free excerpt of the first chapter, will be available online soon....