The New West Under Climate Change: A Rampaging Winter Wildfire 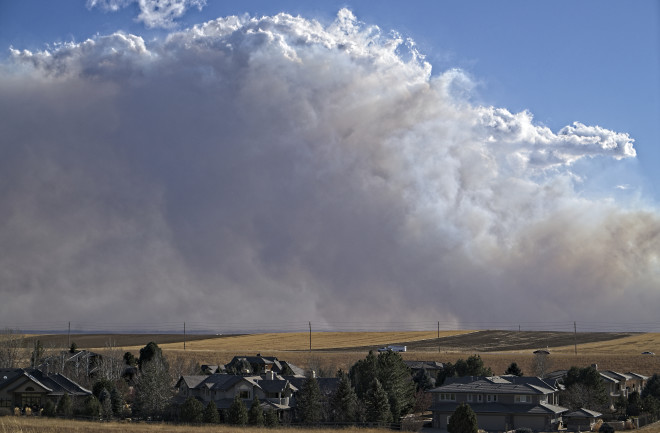 Smoke billows high into the sky from the Marshall Fire blazing near Boulder, Colorado on Thursday, Dec. 30, 2021. This photo was taken from the town of Niwot, about 10 miles to the north of the blaze. (Credit: © Tom Yulsman)

As wind gusts blew at hurricane strength, an horrific wildfire near Boulder, Colorado raced across swaths of land the size of football fields in mere seconds, devouring hundreds of homes and prompting the evacuation of tens of thousands of people.

The governor of Colorado, Jared Polis, described the fire, which erupted on the day before New Year's Eve, as "a force of nature." But this blaze has actually seemed quite unnatural. That's because it has occurred at the foot of some of the highest mountains in North America one month into meteorological winter — long after the fire season typically is brought to end in these parts by cold temperatures and snowfall. Moreover, wildfires have typically ravaged forested mountain areas, not densely populated cities and suburban subdivision out on the grassy plains.

With that in mind, maybe this blaze would be more appropriately described as a "force of humankind."

Long-term drought conditions are mapped here using a metric called the Palmer Drought Severity Index. Colorado is at the center of the map and clearly is in the grips of long-term drought. (Credit: NOAA National Integrated Drought Information System)

The map above of long-term drought conditions supports that description. It uses data on both temperature and moisture to capture the impact of human-caused global warming on drought. And as the warm colors on the map indicate, Colorado — situated in the center — has been particularly hard hit.

With that in mind, the following facts about the astonishing blaze shouldn't be all that surprising:

As it spread with terrifying speed, the entire city of Louisville, CO, with a population of more than 20,000 people, was ordered evacuated, along with surrounding areas. By the evening of Dec. 30, more than 500 structures had been destroyed, and hundreds more were likely still burning. The flames came within a block of a hospital, where ICU and other patients choking on smoke were evacuated.

Flames and smoke from the Marshall Fire are ironically juxtaposed with windmills in this photograph taken from about 10 miles away. The windmills are part of the National Renewable Energy Laboratory's Wind Technology Center. Research here is intended to help wean the nation from climate-altering fossil fuels. Meanwhile, the blaze was almost certainly exacerbated by climate change. (Credit: ©Tom Yulsman)

Driven by the wind through a dessicated landscape, the fire moved so fast that there was no hope of fighting it. First responders “were essentially running ahead of this to try to get people out of the way," said Boulder County Sherriff Joe Pelle during a briefing on Thursday evening. "That’s all you can do.”

He reported that responders trying to make sure people had evacuated from subdivisions had to flee because of the heat. It was so intense, in fact, that it was causing the stickers on their vehicles to peel away.

"My deputies, and the animal control officers who were trying to get hold of horses, said they’ve never seen anything like it," he said. "And we’ve had a lot of fires, so this was a horrific event."

At 1,600 acres by the first evening, the Marshall Fire did not come close, in terms of sheer size, to rivaling 2020's record-setting blazes that scorched hundreds of thousands of acres in the mountains, said Governor Polis. But unlike those fires, this one "is right in and around suburban sub-developments and stores. It’s like the neighborhood that you live in, it’s like the neighborhood that any of us live in." That has made the Marshall Fire "absolutely devastating.”

Waiting to Learn if Their House Burned Down

For Soraya Shehata and Nick Neiman, the fire happened right in the neighborhood they moved to relatively recently. I met them about 10 miles to the north at a high vantage point affording a heart-breaking view of the fire and its gigantic smoke plume stretching off into the distance.

Nick was checking an app on his phone connected to a thermostat in his house. He was dreading seeing a rise in temperature that might be indicative of their house catching fire.

I got a text from Nick later in the evening saying that they were at a friend's house for the night, and that he was still checking on the thermostat. "It's still going!," he said, suggesting that the house had remained intact, at least until that point.

"My heart is going out to all those people who lost their homes today. And I really hope this snow comes through!"

Yes, that's right, snow. The windstorm was the prelude for a winter storm that's forecast to hit on New Year's Eve and into the 1st of January. As the National Weather Service put it, "Wind is not the only forecast concern, with weather whiplash coming our way as we transition rapidly from fire to snow."

The Question of Climate Change

As for the governor's comment that the fire was a force of nature, it seemed clear that he was just trying to find a way to express how frightfully ferocious the blaze was, not commenting on the possible influence of climate change.

But his comment does raise that question about climate change — and on social media, many people have been doing just that.

The GOES-16 weather satellite capture this image of the Marshall Fire blazing on the plains at the foot of the Colorado Rockies during the afternoon of Dec. 30, 2021. The image combines data in the visible part of the spectrum, revealing the smoke plume blowing far to the east, with data in the infrared, which shows the heat signature of the fire in red. (Credit: RAMMB/CIRA)

The Front Range of Colorado is no stranger to hurricane-force gusts avalanching over the mountains and onto the plains when the jet stream and other factors come together in just the right way. They surely did today.

But this windstorm was over the top. National Weather Service forecasters used unusually strong language to describe it in their forecast discussion post not long after the fire had begun. They noted that some sites had seen several hours of wind gusts between 100 and 115 mph — that's as strong as a Category 3 hurricane! They concluded that "we are in the midst of a truly historic windstorm across the Front Range, foothills and urban corridor."

I can't say what role human-caused climate change has played, if any, in generating such extreme winds. That will have to wait for what scientists call an "attribution study." But there is no question that the windstorm was the proverbial match that ignited this truly unprecedented tragedy.

As Becky Bollinger, Assistant State Climatologist of Colorado, put it in a Tweet:

"It’s not just the weather happening today. The ingredients for a devastating wildfire have been coming together since last spring. A very wet spring 2021 helped grow the grasses. A very dry summer and fall dried the grasses out and prepared the kindling."

To be more specific, summer through fall (meaning the end of November) was the very warmest such period on record here in Colorado. It was also the 17th driest.

The month of November itself finished as the 11th driest. The eastern plains, which begin where today's blaze started, were particularly dry, with much of the region seeing less than a tenth of an inch of moisture.

That lack of moisture led to a notable record being set in Denver: The city made it all the way to December without experiencing its first snow of the season — the first time on record that this has ever happened.

As for temperature, 182 locations in Colorado experienced record highs during November, with another 53 tying their record highs, according to the monthly climate summary for the state. Only one location experienced a record low, and none were in a tie.

True, this is a semi-arid region that is no stranger to warm and dry spells, even during the colder months. But when such spells occur naturally now, they happen on top of a warmer climate that is aridifying even more.

All seasons have grown warmer in Colorado, but fall has warmed the most. (Credit: Climate Central)

Colorado's record warmth during this past summer and through November has been part of a long-term trend. As the graph above shows, the warming has been particularly acute during the fall.

And if you're wondering whether the plains around the Boulder-Denver area in particular have experienced the same trend, this graph, based on data from NOAA, should answer your question:

This bar graph shows how the seasons in Denver, Colorado — not far from where the Marshall Fire ignited — have grown warmer over the years. (Credit: Climate Central)

As the graph shows, fall has warmed the most, with summer not far behind.

Lastly, you may have heard that Colorado, like California, has gotten plastered with precipitation in the past week or so. But here, it all fell in the mountains. Very little moisture managed to make its way down onto the plains.

And despite all the snow, the entire state — 100 percent of it — remains in drought. No area more so than the plains stretching east from the foot of the mountains in Boulder County. We are in extreme drought.

As a long-term resident of this area, I can only hope that we'll get some relief from the snowstorm that's coming. But I've lived here long enough, and covered weather, drought and climate long enough, to know that we're going to need a whole lot more than one storm to get us out of this fix.

More From Discover
Planet Earth
Minerals Reveal a New Understanding of Original Life on Earth
The Sciences
Drought in Iraq Has Revealed an Ancient Mesopotamian City
Environment
Midwestern U.S. Forests Doubled in Carbon Storage During the Holocene
Environment
A Wildfire in Arizona is Forecast to Send Smoke Streaming All the Way to the Great Lakes
Planet Earth
How Old Is the Oldest Sea Turtle?
Environment
New CO2 Record Prompts a Scientist to Ask, 'What's It Going to Take for Us to Wake Up?'
Recommendations From Our Store
My Science ShopDiscover STEM Kits
My Science ShopDiscover 2022 Calendar
My Science ShopStrange Science
My Science ShopElements Flashcards
Shop Now
Stay Curious
Join
Our List