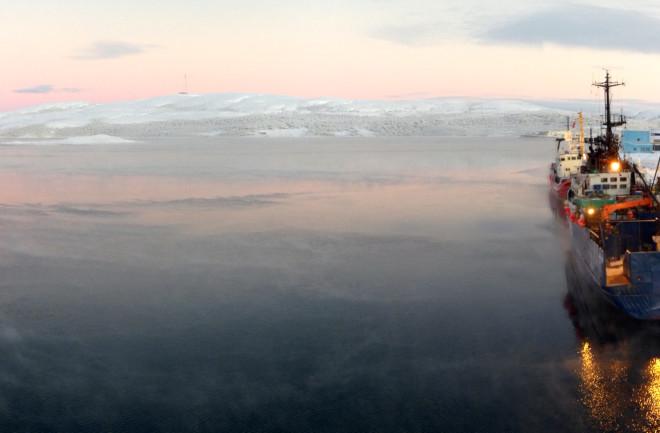 Fog running across the surface of Bøkfjorden near the shore of Kirkenes, Norway, is evidence of heat being released from the relatively warm, ice-free waters. (Photograph: © Tom Yulsman) As a frigid blast from the north takes aim on a large part of the United States — again — I'm sitting at the source: the Arctic — where I am paradoxically actually enjoying the benefits of some tropical heat. You can see evidence of that heat in the mosaic of iPhone images above. But before I explain this particular polar paradox, I should say that as I'm writing this I'm in a darkened lecture hall at the Arctic University of Norway in the lovely, cosmopolitan city of Tromsø. I'm here to cover the Arctic Frontiers conference. The name captures the gestalt: The Arctic is warming about twice as fast as the mid-latitudes, which makes this region a new frontier, at least in the view of industry and government officials eager to take advantage of what they see as new opportunities brought about by the changing climate. It is, in short, a place where one fifth of the world's undiscovered oil and natural gas is expected to reside; a region that is attracting more and more tourists eager to experience their own vision of the frontier; and an area that promises faster transport of resources and manufactured goods between Europe and Asia along the increasingly ice-free Northern Sea Route — the "Suez of the North," as it has been dubbed. Last weekend I visited a node in the growing network of human activity in the Arctic: Kirkenes — a town of about 3,500 people situated on a fjord that leads out to the Barents Sea. Close to the Russian border, and a magnet for Russians who travel here from Murmansk to buy consumer goods, it is about as far north and east as you can go in Norway. When I was there, global warming wasn't exactly obvious: Temperatures went as low as -20 degrees F (not counting the wind chill). Yet I couldn't help but notice the native birch trees, encased in jackets of hoar frost. These trees grow at a latitude that's roughly the same as that of Barrow, Alaska — a much colder place where treeless tundra prevails. As with the rest of Norway, conditions here are considerably milder than the latitude would suggest. And the photo at the top of this post shows why. Look for the thin fog rising from the dark waters. It is symptomatic of relatively warm water, which keeps the coast of Norway, including this part of the Barents Sea, mostly ice free.

As seen from a Hurtigruten ferry, sea smoke rises from the Bøkfjorden near Kirkenes, a town in the far northeastern part of Norway. (Photograph: © Tom Yulsman) As heat is released from the water into the frigid atmosphere, it warms the air just above it. When a light breeze mixes this warm, moisture-laden layer with frigid air directly above it, the temperature of the warmer air plunges below the dew point. And the result is steam fog, or "sea smoke." But where does this heat come from, how does it get here, and what links are there to global warming? The screenshot below answers two of those questions. Click on it to see the full visualization.

A screenshot of a visualization showing the Gulf Stream during the period from June 2005 through December 2007. (Click to watch.) It was produced based on computer modeling as well as satellite and in-situ data. (Source: NASA Goddard Space Flight Center) It depicts the Gulf Stream, which flows from the tropics, up along the eastern coast of the United States. As the visualization shows, it isn't really a single current. Instead it consists of ocean eddies and other narrow current systems, which transport warm, relatively salty water to the north and east. The system continues as the North Atlantic Current, and then the Norwegian Current. Here in Norway, the stream of warm water keeps the coastline ice free, all the way past the Arctic Circle and up into the Barents Sea. Among other things, this keeps the northern Russian port of Murmansk ice free even in winter (a factor that was key to the Allied victory over Nazi Germany in World War II; but I digress...) Which brings me full circle back to the photo at the top of the post. The tropical heat being released into the atmosphere has always made this part of the world more habitable than it would otherwise be. And now, thanks to human activities, the heat is on even more. In fact, there is evidence that the northwest Barents Sea has warmed significantly in recent decades, thanks in part to warming of North Atlantic surface waters. Just one more sign of change in the rapidly changing Arctic. In coming days, I'll be writing more about this subject from the conference. I hope you'll check back here for more.