Homes once promised to produce as much energy as they used, but the trend hasn't caught on. 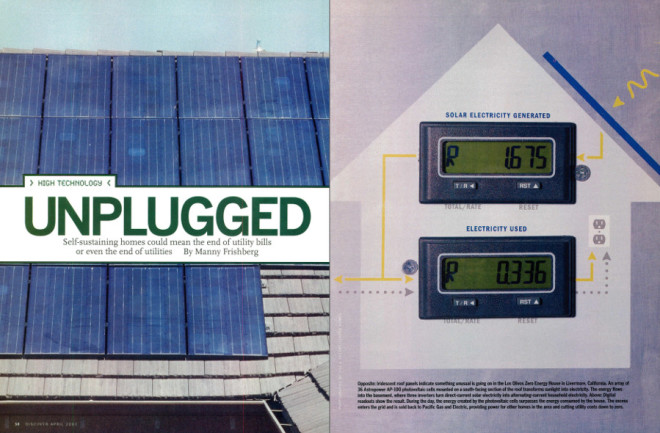 Our April 2003 issue looked at a home that could produce as much energy as it used.

In 2003, when we wrote about the Los Olivos Pilot Zero Energy House in Livermore, Calif., it stood as a beacon, promising a new age of homes that could produce as much energy as they used. (“Unplugged,” April 2003.) Although the house is still up and running more than a decade later, the net-zero energy trend has yet to hit the mainstream.

Centex, the home’s builders, stopped their zero-energy efforts a few years later, finding that buyers are more willing to pay for a few energy-efficient features than a full net-zero home, complete with solar panels and a higher price tag.

Yet Davis Energy Group, the consultant behind Los Olivos, still believes in the net-zero dream. The company, which collaborates with utilities and builders to create and monitor net-zero buildings, is working on several projects, says co-founder David Springer. This includes the largest planned net-zero energy community in the U.S., at the University of California, Davis, which will eventually house up to 3,000 people.

California has a more ambitious goal for all new residential construction to be net-zero by 2020. Although the slow process of updating housing standards may make that goal unreachable, says Springer, most of the necessary technology already exists. Energy Star appliances, LED lighting, condensing furnaces and ventilation cooling systems can dramatically lower energy use, while high-performance walls, attics and insulated foundations keep heat loss to a minimum.

To demonstrate the potential of net-zero homes, the National Institute of Standards and Technology created a test house near Washington, D.C., to simulate the energy demands of a family of four for a year. The house ended up last year with enough extra energy to power an electric car for roughly 1,440 miles. Homes like this and Los Olivos are important places to test and evaluate new tools and techniques, and to increase awareness — the first step toward building a net-zero future.

[This article originally appeared in print as "Still Unplugged."]