The Mystery of the Missing Plastic in the Atlantic Garbage Patch 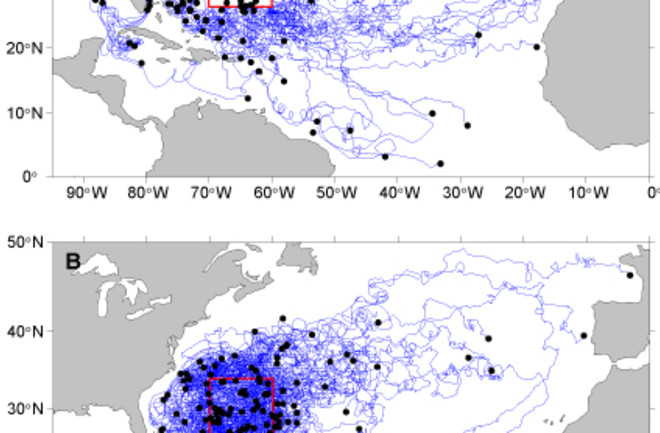 Earlier today we reported on scientists at the Woods Hole Oceanographic Institution trying to answer the question, "Where'd all the oil in the Gulf go?" (At least some of it is floating around in giant plumes.) In the same issue of the journal Science released this afternoon, another team from Woods Hole tried to answer another pressing ocean question: "Where'd all the plastic in the Atlantic go?" We're referring to the great patch of plastic in the North Atlantic Gyre. You might have read the stories in DISCOVER and elsewhere about the more famous Great Pacific Garbage Patch, a Texas-sized soup of tiny plastic pieces in the middle of that ocean. Circulating ocean currents create these gyres in several places around the world, and ocean-borne plastic gets trapped. The Woods Hole paper is the result of a two-decade study of the Atlantic patch that produced a surprising result: The amount in total plastic appears to have leveled off—at least according to the data. Humans haven't stopped putting plastic into the ocean, so what gives?

"We know that global production of plastics has increased substantially over the time period" and disposal also has increased, said Kara Lavender Law of the Sea Education Association in Woods Hole, Mass. "If there is more plastic trash it's hard to believe more is not making it into the ocean. There is missing plastic out there," she said [AP].

One possible answer, the scientists say, is that their methods of capturing and sampling the plastic

miss the smaller pieces. And there are lots of smaller pieces: The garbage patches aren't just dumps that happen to be out at sea. The thrash of the ocean water and the sun's UV rays wear down the plastic bottles and bags into ever-smaller pieces, which now causes great concern about marine animals eating them. Another possibility for the team's finding is that algae or other sea life coat some plastic pieces and make them heavy enough to sink. One thing is not in doubt: the North Atlantic patch covers an enormous area, just like its Pacific counterpart.

In their first publication of these data since the late 1980s, the SEA team reports that it found plastic in more than 60% of 6136 tows over 22 years. The levels are low close to shore but rise hundreds of kilometers off the coast between 22 and 38 degrees latitude (roughly from the Bahamas to Baltimore). "When you expect to see zero plastic hundreds of miles from shore, it's shocking," says lead author and SEA oceanographer Kara Lavender Law. But the plastic is "relatively dilute," she adds—up to 1000 tiny pieces filtered from the equivalent of 2000 bathtubs of water [ScienceNOW].

The Intersection: Voyage to the Plastic Island of Garbage

Image: SEA / Science (trajectories of drifting buoys near the gyre)