Forecast for storm surge Sunday, Sept. 9 at 1 p.m. through Tuesday, Sept. 12 at 7 a.m. (Source: National Weather Service) Hurricane Irma is a true monster, exceeding the size of Florida itself, and threatening to flatten structures throughout the state with extreme winds. But perhaps the biggest risk is now posed by storm surge – water pushed up onto land. The animation above shows an experimental forecast for storm surge from the National Weather Service. It shows the height of water above the land's surface in feet over time, from 7 a.m. EST today through 7 a.m. on Tuesday. (Sept. 9 - 12, 2017.) "Storm surge is often the greatest threat to life and property and directly accounts for about half of the deaths associated with tropical cyclones in the United States," according to the National Hurricane Center. With Irma now forecast to track up the Gulf coast of Florida, the very biggest risk is along the shore in the southwestern portion of the state, with possible surges exceeding 15 feet there, as the animation above shows. That could prove absolutely devastating. But very significant and potentially deadly storm surge is also likely in many other portions of the Florida coast, and farther north as well. It is very important to keep in mind that uncertainties in the experimental forecast mean that the actual areas that will experience life-threatening inundation may differ from the areas shown in the animation. The weather service emphasizes that regardless of whether or not you are in the highlighted areas, you should promptly follow evacuation orders and other instructions from local emergency management personnel. The danger from this storm cannot be overstated. 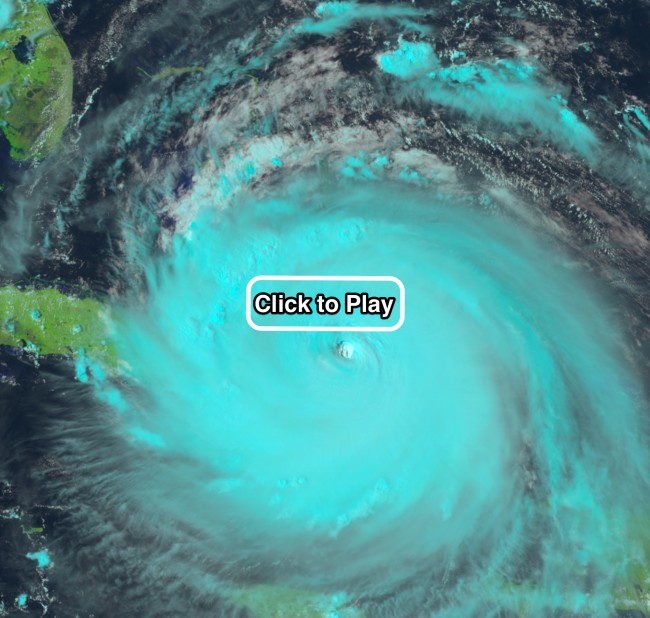 An animation of high resolution GOES-16 weather satellite images shows extreme Hurricane Irma swirling near Cuba on Friday, Sept. 8, 2017. (The animation may take some time to fully load after you click on the screenshot above. Source: RAMMB Slider) As the latest forecast discussion from the National Hurricane Center puts it:

Irma is expected to make landfall in Florida as an extremely dangerous major hurricane, bringing life-threatening wind impacts to much of the state regardless of the exact track of the center. Wind hazards from Irma are also expected to spread northward along the coast of Georgia and South Carolina where a Hurricane Watch has been issued.

Sea level has come up by an average of about eight inches globally since 1880, thanks to human-caused climate change. This is already making storm surge worse than it would otherwise be. And no state is more at risk than Florida. But other many coastal areas are at great risk as well. According to analyses by Climate Central: