The monster's eye: satellite video offers a terrifying view of Irma, 2nd strongest storm ever recorded in the Atlantic 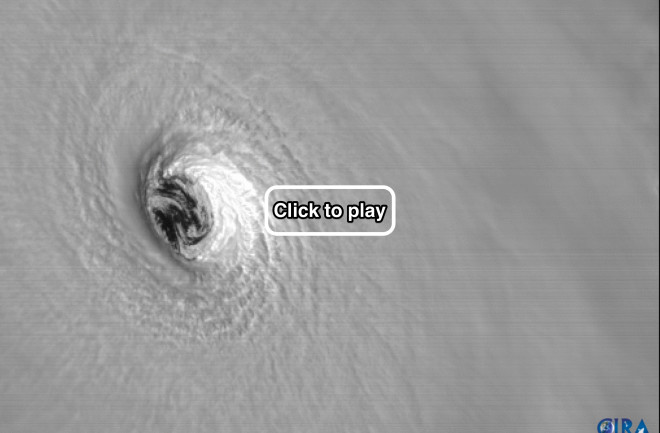 Closeup look at Hurricane Irma's eye, acquired by the GOES-16 weather satellite. (Source: RAMMB/CIRA) As I'm writing this on Wednesday morning, the eye of Hurricane Irma — a “potentially catastrophic” Category 5 storm – has passed over the islands of Barbuda, Saint Barthelemy and Saint Martin, and was shortly headed for the Virgin Islands. I shudder to think what has been happening on the ground with the storm's maximum sustained winds clocked at 185 miles per hour, according to the National Hurricane Center. This video from Saint Martin says it all: https://twitter.com/MeteoExpress/status/905402131481493504 As Irma continues to grind like a buzz saw toward Puerto Rico and eventually Florida, I'll try to post regular updates featuring remote sensing images of the storm. The video at the top of this post is my first installment. It was acquired by GOES-16 as the weather satellite stared into the eye of the monstrous atmospheric vortex. If you watch closely, you can spot swirling shapes within the low-level clouds rotating around the center axis of the eye. Each one is a relatively small vortex itself. Scientists call this a "meso-vortex."

GOES-16 view of Irma near sunrise on September 6, 2017. When you click on the screenshot, the animation may take some time to load. (Source: CIMSS) Here's another view captured by GOES-16. It shows the storm over the course of two hours near sunrise on September 6, 2017. Each frame of the video was acquired a minute apart, providing an astonishing perspective. The video shows Irma moving through the Leeward Islands to the east of Puerto Rico, with a clear, distinct eye — a characteristic of particularly strong hurricanes. After passing through the Virgin Islands, Irma is expected to take aim on Puerto Rico. After that, all indications are that it will take a turn to the northwest and north, heading toward southern Florida later this week. But the hurricane center reminds us that the average uncertainty in the track of a hurricane at four and five days out is 175 and 225 statue miles, respectively. So it's still too soon to say with any certainty what Irma may hold in store for Florida. If Irma should wobble over the mountains of Cuba, it would probably lose some strength. But for now, here's the sobering news from the hurricane center:

Irma is forecast to remain within favorable atmospheric conditions and over warm waters during the next 3 to 4 days. Therefore, Irma is likely to remain a very powerful hurricane during this time . . .