Pure, round and super strong: This is the only sand down for a fracking job. 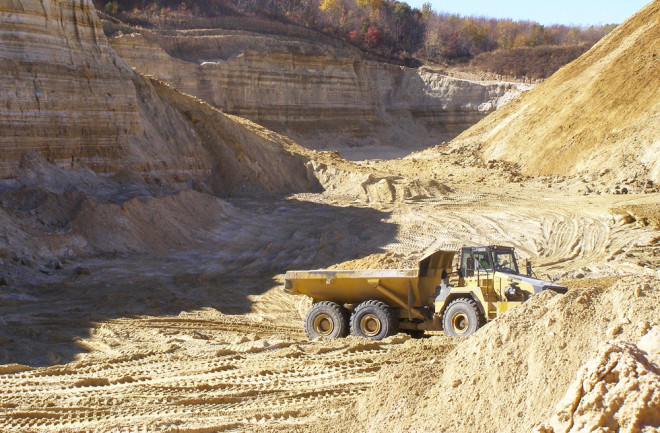 Descending a few dozen feet into the open pit mine, visitors enter a monochromatic world that looks like a desert planet from Star Wars. On all sides, walls of nearly pure quartz sandstone rise up, the sparkly tan of raw cane sugar, layered with bands of different shades. Loose sand sits in small piles at the base of the cliffs; in the distance, larger piles are being loaded into huge yellow dump trucks that can move 70 tons of the stuff at a time.

But they’re not digging for valuable ores or precious metals buried beneath all this sand. This is a sand mine, and there are dozens like it in western Wisconsin. This state, and others in the Midwest, have some of the best sand in the world.

Sand has been mined here for over a century. It’s used for glass, casting in foundries, even playgrounds and golf course sand traps. But in the last 10 to 15 years, the industry has exploded because this sand has specific characteristics. It’s pure — almost entirely quartz, or silicon dioxide — and the particles are round. This combination makes Wisconsin sand ideal for use in another extractive industry: hydraulic fracturing, or fracking, in the quest for natural gas and oil.

Shaped by Ancient Waves and Wind

The geologic processes that created this perfect sand likely took millions of years, says Jay Zambito, an associate professor of geology at Beloit College in Wisconsin and formerly a geologist with the Wisconsin Geological and Natural History Survey.

Half a billion years ago, when this sand was forming, Wisconsin was quite different, and in a very different part of the globe. It was closer to the equator and was more or less at the edge of an enormous inland sea. The land was mostly desert, Zambito says, so the sand at that ocean’s edge cycled back and forth between the waves and the desert winds. “It’s just going back and forth over and over until the sand grains are finally deposited,” he says.

Quartz is more chemically stable than most other common minerals. So as ocean waves, rain and wind broke down rocks to smaller particles on Earth’s surface, most of those minerals weathered away, leaving just quartz sand behind. That constant motion, says Zambito, also helped give the sand particles their spherical shape. (Under a microscope, they’re clearly rounded, but they’re not perfect spheres. To human eyes, though, they don’t look or feel that different from regular beach sand.)

Quartz’s hardness and uniformity make it ideal for use in fracking. That basic process involves drilling a borehole into the ground, first vertically and then horizontally along a layer of shale. After a steel pipe is inserted, cemented into place and perforated in the target spot, the hole is pressurized by injecting a combination of sand, water and chemicals. The intense pressure fractures the surrounding shale; it’s through those fractures that oil and natural gas can flow back up to the wellhead, along with some of the water and chemicals originally used to pressurize the borehole.

When the initial pressure that caused the fractures is removed, sand is what prevents those cracks from collapsing, essentially propping them open. It’s one of many proppants, and it can resist the intense pressures at those depths — withstanding pressures of over 5,000 pounds per square inch before it crushes, sufficient for most fracking jobs.

Fracking operations can use other materials as proppants, such as ceramic particles or broken-up walnut husks. But Ron Dusterhoft, a technology fellow at Halliburton, says sand is better these days mainly because it’s cheaper and gets the job done, even though the manufactured proppants are generally stronger.

1. Clear any existing vegetation. 2. Remove the topsoil and any rock that stands between you and the sandstone. 3. If the sandstone is really hard, use explosives to bust it into smaller pieces before scooping it up with excavation equipment. 4. Haul the sandy hunks to the crusher, where they’ll be pulverized into sand. 5. Wash the sand with water to remove silt and clay, and with flocculants to remove particles too fine for fracking. 6. Stockpile clean, wet sand over drain tiles to collect water for reuse. 7. Send wastewater to holding ponds where particulates settle out. 8. Dry particulates to use as backfill or sell as industrial sand. 9. Backfill. (Credit: Banksphotos/Istock)

There are other sources of sand across the country, most notably in Texas, whose sand is often referred to as “Texas brown sand” in contrast with the “northern white sand” mainly from Wisconsin, Minnesota and Illinois. The darker color of the Texas sand is due to impurities — minerals besides quartz — which render it weaker than the purer sand.

Some companies use Texas brown sand because it’s closer to the wells where fracking is occurring, thus saving money on transportation while still getting sufficient results in less demanding mines. But in terms of purity and crush strength, Wisconsin’s sand is hard to beat.

Any sort of extraction — from mining to fracking — affects the environment. Companies that operate sand mines in Wisconsin are required to reclaim the land they’ve dug up. At one of these mines, about 400 acres are actively being mined, and between 10 and 40 acres are reclaimed each year. This usually involves returning the sand that cannot be sold along with the clay, shale and topsoil that had to be removed to get to the sand, and then planting grasses and other native flora.

In neighboring Minnesota, which has plenty of high-quality sand as well, there has been far less sand mining partly due to concerns about the impact of mining on the landscape and the environment, says Johanna Rupprecht, a policy organizer with the Land Stewardship Project. That non-profit organization has worked with towns and counties in Minnesota to pass moratoriums and outright bans on sand mining. For many people, it’s not just air and water quality worries, “it’s just about the inherent value of the land, that it is not right to do this to our hills and bluffs and farmland for the profits of the oil and gas industry,” says Rupprecht.

Sand mining can also pose a human health risk in the form of silicosis, a lung disease caused by inhaling tiny, airborne silica particles. Strict safety protocols are followed any time mine workers are around dry sand, says Nick Bartol, a public relations manager at Badger Mining Corp., which operates three mines in Wisconsin. But public health researchers at the University of Wisconsin-Eau Claire have found some levels of airborne particulate matter — which can include silica dust — around sand mines that are higher than EPA standards. Inhalation of fine particulate matter has been strongly linked to both cardiovascular and lung problems.

Sarah Geers, an attorney with the non-profit Midwest Environmental Advocates, says there hasn’t been enough research on potential public health impacts. “We don’t know for sure if that’s an issue because we just don’t have testing for it,” she says of the risk of silicosis to people living near sand mines.

Return to the Earth

Back in the monochromatic world of the mine, the large dump trucks bring sand to the processing facilities on site. It still requires a good deal of processing before it’s ready to be used in fracking: It has to be cleaned, sorted by grain size, dried and then shipped out, usually by rail.

The sand isn’t above ground for long before the strong little spheres arrive at their final resting place, deep underground in places like Pennsylvania, North Dakota, Texas and Canada. There’s a certain, strange irony to it: digging up sand that has lain dormant for hundreds of millions of years, only to send it back into the earth among rocks that are nearly as old.

Geoffrey Giller is a science writer and photographer who covers wildlife, conservation and the environment. His reporting was supported by a fellowship from the Institute for Journalism and Natural Resources. This story originally appeared in print as "Mining the Miniscule."