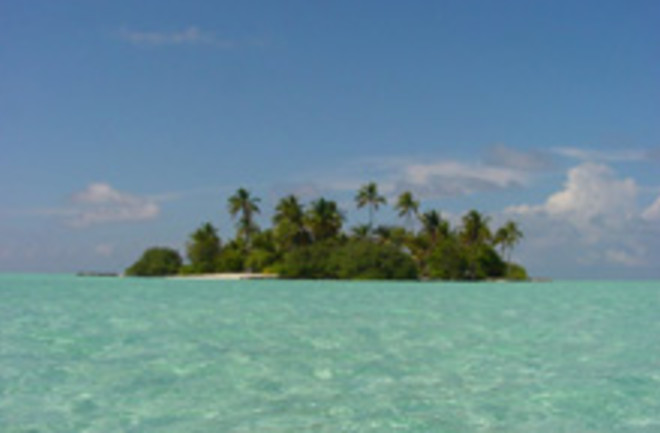 Last year, President Mohamed Nasheed announced that his country would look to buy land for Maldivians to resettle on when sea levels rose and caused the low-lying islands to be uninhabitable. That plan proved too expensive, but Nasheed has now announced a $1.1 billion plan that will shift the Maldives entirely to renewable energy over the next ten years, making it the world’s first carbon-neutral nation. The archipelago Indian Ocean nation consists of almost of 1,200 islands, of which only about 250 are inhabited.

None of the coral islands measures more than 1.8 metres (six feet) above sea level, making the country vulnerable to a rise in sea levels associated with global warming [

BBC]. Scientists at a meeting in Copenhagen last week predicted that glaciers and ice sheets melting as a result of global warming could boost the level of the world's oceans by as much as a metre by the end of the century [CBC]. The Maldives currently imports diesel and fuel oil to power its inhabited islands, but the new plan would see fossil fuels replaced by wind and solar power, with EU carbon credits purchased to offset emissions generated by tourists flying in. The plan would require 155 wind turbines supplying 1.5 megawatts each and a half a square kilometre of solar panels to meet the needs of the islands' 385,000 people…. The programme envisions installing battery backup in case wind and solar sources are inadequate, and a power plant to be run off coconut husks in the capital, Male. [Reuters]. With an economy almost entirely dependent on fishing and tourism, the Maldives will need help affording the estimated $110 million annual price tag. It plans to privatize the state-owned electricity system and to invite outside investors and donors. Nasheed said the country was already spending similar sums on existing energy sources, and he expected to recover the extra cost within the decade. "We start almost from scratch, we are having to go for new investments in almost all areas and it is quite pointless for us to go to yesterday's technologies" [BBC]. "It's going to cost a lot of money but it will also save a lot of money from not having to import oil"[Reuters], said Mark Lynas, an environmentalist who helped the Maldivian government to develop the plan. Lynas also says the project will serve as an example to the rest of the world.

"The point of doing it is that it is something the Maldives can lead the world in.... No rich country has the excuse that it is too expensive and we can't do anything" [Reuters]

, he says. Related Content: 80beats: Maldives President Says His Country Must Save Up for a New Homeland 80beats: A Rising Tide Swamps All Coasts: New Estimates of Sea Level Rise Spell Global Trouble 80beats: Dumping Iron Into the Ocean Might Not Save the Climate, After All