The little storm that could: Watch a tenacious tropical depression race ahead of a huge blob of Saharan dust 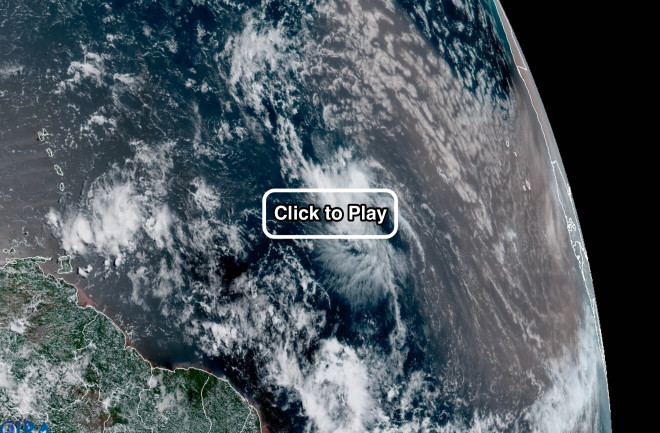 The GOES-16 weather satellite eyed Tropical Depression Four in the central Atlantic Ocean on Thursday afternoon, July 6, 2017, as it raced ahead of a huge blob of brownish dust streaming off the Sahara in Africa. (Source: CIRA/RAMMB/NOAA) It may have a humdrum name, but since Tropical Depression Four formed in the central Atlantic Ocean on Wednesday evening, it has certainly distinguished itself. It is a "small, tenacious depression" that "has continued to hold its own," the National Hurricane Center said in its update this morning. The spectacular animation above, from the GOES-16 weather satellite, suggests why that word, tenacious, is appropriate. Tropical Depression Four has managed to stay alive despite dry and dusty air streaming west from the Sahara in Africa. In the video, you can see the swirling depression racing ahead of a large mass of dusty, brown-tinged air. For a tropical depression to rev up and grow into a full-blown hurricane, it needs to be fueled by warm, moist air. So dry air has the opposite effect — it saps the strength of depressions and hurricanes. Tropical Depression Four has held its own while struggling against the dry air. Yet ultimately, the Saharan Air Layer, or SAL, as scientists call it, is winning. And that means in all likelihood the depression will degenerate by tonight.

The yellow and red tones in this infrared imagery from the Meteosat satellite reveal the presence of dry and dusty air in lower to middle levels of the atmosphere. Streaming west from Africa, it is called the Saharan Air Layer. The circulation of Tropical Depression Four (circled) wrapped some of that dry air into itself, helping to sap it of strength. (Source: University of Wisconsin CIMSS/NOAA Hurricane Research Division) As the hurricane center puts it:

. . . the depression is moving into a relatively low-moisture environment, and this factor in combination with the fast motion of the cyclone will probably result in weakening. The depression is forecast to become a remnant low or degenerate into a open wave tonight.

Lastly, I wanted to say something about the GOES-16 animation at the top of my post. As with other imagery from the new satellite, it is breathtakingly detailed, both in time and space. As I wrote on April 23rd, when I introduced a semi-regular series dedicated to showcasing the satellite's dazzling imagery:

The Advanced Baseline Imager, or ABI, is the primary instrument on GOES-16, and it is far more capable than the current imagers found on the operational GOES-East and GOES-West satellites. It can create an image of Earth’s full disk in just 5 to 15 minutes, compared to every three hours for the current satellites. In terms of its resolving ability, the GOES-16 imager is twice as powerful as our current GOES satellites. It can see things as small as .5 kilometers across, compared to 1 kilometer for its predecessors.

GOES-16 is now on its shakedown cruise and is not yet officially operational. But that should change in November, when it is scheduled to be moved to the GOES-East position. The existing satellite in that position, GOES-13, will be placed into "orbital storage," according to NOAA, and remain available should it ever be needed. I hope you'll check back here at ImaGeo for more stunning imagery from GOES-16!