The Limits to Environmentalism

By Keith Kloor, a freelance journalist whose stories have appeared in a range of publications, from Science to Smithsonian. Since 2004, he's been an adjunct professor of journalism at New York University. This piece is a follow-up from a post on his blog, Collide-a-Scape. 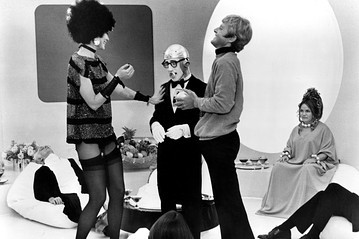 In Sleeper, Woody Allen finds that socializing is different after the 70's. Environmentalism? Not so much.

If you were cryogenically frozen in the early 1970s, like Woody Allen was in Sleeper

, and brought back to life today, you would obviously find much changed about the world. Except environmentalism and its underlying precepts. That would be a familiar and quaint relic. You would wake up from your Rip Van Winkle period and everything around you would be different, except the green movement. It's still anti-nuclear, anti-technology, anti-industrial civilization. It still talks in mushy metaphors from the Aquarius age, cooing over Mother Earth and the Balance of Nature. And most of all, environmentalists are still acting like Old Testament prophets, warning of a plague of environmental ills about to rain down on humanity. For example, you may have heard that a bunch of scientists produced a landmark report that concludes the earth is destined for ecological collapse, unless global population and consumption rates are restrained. No, I'm not talking about the UK's just-published Royal Society report

, which, among other things, recommends that developed countries put a brake on economic growth. I'm talking about that other landmark report

from 1972, the one that became a totem of the environmental movement. I mention the 40-year old Limits to Growth

), but also to demonstrate what a time warp the collective environmental mindset is stuck in. Even some British greens have recoiled in disgust at the outdated assumptions underlying the Royal Society's report. Chris Goodall, author of Ten Technologies to Save the Planet

: "What an astonishingly weak, cliché ridden report this is...'Consumption' to blame for all our problems? Growth is evil? A rich economy with technological advances is needed for radical decarbonisation. I do wish scientists would stop using their hatred of capitalism as an argument for cutting consumption." Goodall, it turns out, is exactly the kind of greenie (along with Lynas) I had in mind when I argued

last week that only forward-thinking modernists could save environmentalism from being consigned to junkshop irrelevance. I juxtaposed today's green modernist with the backward thinking "green traditionalist," who I said remained wedded to environmentalism's doom and gloom narrative and resistant to the notion that economic growth was good for the planet. Modernists, I wrote, offered the more viable blueprint for sustainability: "Pro-technology, pro-city, pro-growth, the green modernist has emerged

in recent years to advance an alternative vision for the future. His mission is to remake environmentalism: Strip it of outdated mythologies and dogmas, make it less apocalyptic and more optimistic, broaden its constituency. In this vision, the Anthropocene

is not something to rail against, but to embrace. It is about welcoming that world, not dreading it. It is about creating a future that environmentalists will help shape for the better." The piece seemed to strike a chord. It was pinged around a lot on Twitter and generated some heated micro-conversations. A number of people said it was a breath of fresh air. Plenty others were critical. Some complained that I set up a false dichotomy, that I painted a simplistic, cartoonish picture of the green traditionalist, and that it was unfair to the many grassroots greens working at a local level, who have embraced technological and pro-market solutions. I can't speak to that last charge, since my post was written on a large canvass, with environmentalism's representative voices---the leading writers, scientists, and big NGO's---in mind. Collectively, these are the driving forces that shape attitudes, public discourse, green politics and policy. If you pay close enough attention to media stories, what is said by mainstream green groups, and of course to big splashy reports put out by esteemed institutions like the Royal Society, you will notice that the beating heart of environmentalism belongs to the traditionalist, as I have characterized him/her. For example, let's look at Worldwatch Institute's 2012 State of the Earth, in a chapter

titled, "The path to degrowth in overdeveloped countries." I'm assuming this path is suggested for nations such as the United States, whose citizens are fond of big cars, big box stores, and Big Gulps at the 7/11. Though Americans are still recovering from the worldwide economic meltdown, here's how the Worldwatch Institute aims to win them over: "The rapidly warming Earth and the collapse of ecosystem services show that economic “degrowth” in overdeveloped countries is essential and urgent. Degrowth is the intentional contraction of overly inﬂated economies and the dispelling of the myth that perpetual pursuit of growth is good for economies or the societies of which they are a part." Yes, mainstream greens are actually running on a platform of intentional economic contraction. Now, you might say, well, that's just one environmental group. Fair enough. Let's go to this manifesto

, in a recent issue of Orion magazine. Speth has been a leading American environmentalist for decades. He is the founder of the World Resources Institute, a co-founder of the Natural Resources Defense Council and currently on the faculty at Vermont law school. In his Orion essay, he writes: "Economic growth may be the world’s secular religion, but for much of the world it is a god that is failing—underperforming for most of the world’s people and, for those in affluent societies, now creating more problems than it is solving. The never-ending drive to grow the overall U.S. economy undermines families and communities; it is leading us to environmental calamity; it fuels a ruthless international search for energy and other resources; it fails at generating the needed jobs; and it rests on a manufactured consumerism that is not meeting our deepest human needs." To understand why this is a pinched view of economic growth that also conflates a number of legitimate issues, read this piece

by Robert Reich. In truth, he writes, "economic growth isn’t just about more stuff. Growth is different from consumerism. Growth is really about the capacity of a nation to produce everything that’s wanted and needed by its inhabitants. That includes better stewardship of the environment as well as improved public health and better schools. (The Gross Domestic Product is a crude way of gauging this but it’s a guide. Nations with high and growing GDPs have more overall capacity; those with low or slowing GDPs have less.)" Poor countries tend to be more polluted than richer ones, Reich says, "because they don’t have the capacity both to keep their people fed and clothed and also to keep their land, air and water clean." Oh, and by the way, Reich is a longtime liberal luminary and currently a professor of public policy at the University of California, Berkley. The way I see it, Speth is a green traditionalist, the kind who demonizes economic growth based on faulty reasoning and perhaps an ideology that associates growth with environmental plunder. Reich is a green modernist (though I'm not sure he'd call himself a green), the kind who recognizes that irresponsible resource extraction "isn't an indictment of growth itself. Growth doesn’t depend on plunder. Rich nations have the capacity to extract resources responsibly." Do green traditionalists have the capacity to shed their long-standing anti-economic growth bias? Do they have the capacity to incorporate some of the modernist outlook and embrace nuclear power and genetically modified crops, two technologies that experts say will be necessary to expand if the worst of climate change is to be avoided? Probably not anytime soon. In the comment thread to my post

from last week, a reader recalled

watching (several years ago) counterculture icon Stewart Brand in a BBC 'Newsnight' debate with mainstream environmentalists: "He was pro-city, pro-nuclear and pro-tech. He was also virtually shouted down."